In a research report sent to investors, William Blair analyst Amanda Murphy maintained an Outperform rating on Illumina (NASDAQ:ILMN), as the company reported fourth-quarter results that were relatively in line with the company’s preannouncement. No price target was provided.

Murphy wrote, “The key to stock performance in 2015, in our view, is the company’s ability to report upside to guidance, which could, in part be fueled by the HiSeq 3000/4000 and the X5 launches. Illumina has reported limited cannibalization in its product portfolio to date. It is a bit early to know, however, how much cannibalization might occur within the expanded HiSeq family and whether the new products will be enough to offset the decline in instrument sales expected in 2015 (which could be an issue for the stock in the second half), as the company faces tough X Ten comps. That said, there are 1,000 HiSeqs in the field that cannot access the terrabase reagent kit and could be accessible for replacement with the HiSeq 3000/4000. In addition, management seems to feel comfortable that the X Five will lead to increment HiSeq X demand (although is not assuming this in guidance). Thus, there is the potential for these new products to add at least 10% to 15% of annual instrumentation growth, which is not currently assumed in estimates.” 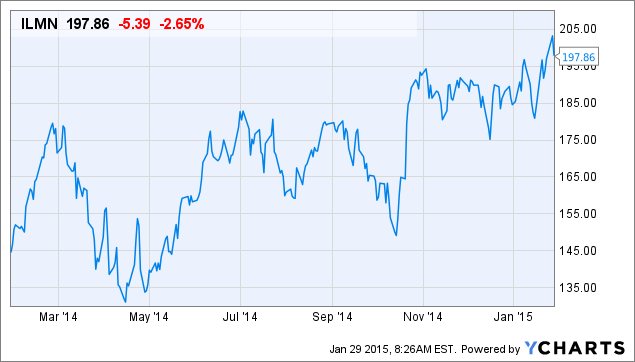