O’Brien wrote, “Thursday, October 16, Stryker reported better-than-expected third-quarter results on both the top and bottom lines. Management maintained its organic sales growth guidance range but indicated that earnings per share are now expected to fall at the low end of previously issued guidance ($4.75-$4.80) due to incremental currency pressure. The Street estimate is already at the low end of this range, and we believe that, excluding the incremental currency impact ($0.04), the company would have actually come in at the high end of its prior full-year EPS guidance. Recon. On a constant-currency basis, hip sales were up 4.1% and knee sales were up 6.4%, representing a sequential improvement from the first quarter. With heightened concerns around increased pricing pressure in the United States following competitor commentary, we were pleased to hear that Stryker is seeing price to be relatively steady on a sequential basis. On a volume basis, we continue to believe that the large joint market will deliver stronger performance in the second half of 2014 relative to the first half. While the MAKO integration continues to be challenging, we do not believe this is overly worrying given that this acquisition is a long-term share- taking strategy. “ 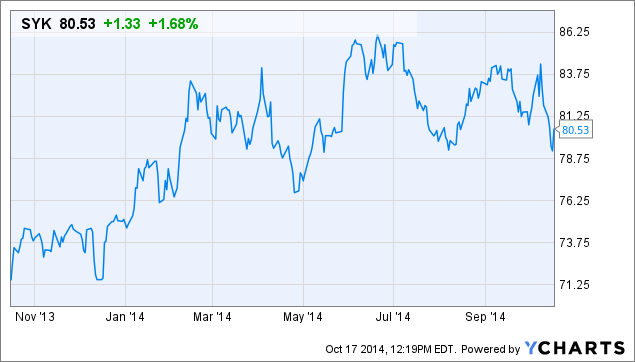