Lugo observed, ” After the close on Thursday, October 16, Sarepta Therapeutics announced the publication of data surrounding the safety and pharmacokinetic (PK) profiles of two experimental combinations of its next-generation RNA-based technology (PMOplus) applied to Ebola and Marburg viruses. AVI-6002, the candidate to treat Ebola, is a combination of AVI-7537 and AVI-7539 that is administered intravenously in a 1:1 combination dose. This combination was selected because early animal studies suggested that they were the best candidates for post-exposure prophylaxis in Ebola. With the recent reports in the mainstream media surrounding Ebola in the United States and abroad, this publication lends support to the company’s development of a potential candidate for the treatment of the Ebola virus in humans. The safety study was performed in 36 healthy subjects (N=5 per dose) with an average age of 31 years, and examined six escalating doses (0.005, 0.05, 0.5, 1.5, 3, and 4.5 mg/kg of each candidate in the combination) diluted in 150 ml of saline and delivered over 30 minutes against placebo (150 ml saline alone, N=6). Subjects were observed for 96 hours after the drug administration for pharmacokinetic data collection. Subjects returned for follow-up visits at 14, 21, and 28 days after dosing for assessment of adverse events (AE). “

According to TipRanks.com, which measures analysts’ and bloggers’ success rate based on how their calls perform, analyst Tim Lugo has a total average return of -6.9% and a 43.8% success rate. Lugo has a -34.3% average return when recommending SRPT, and is ranked #2935 out of 3336 analysts. 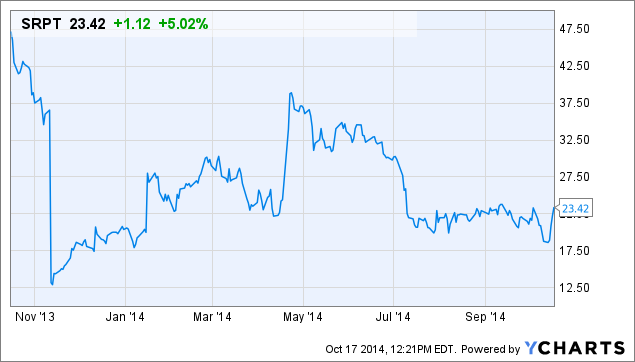