Zackfia wrote, “Sales trends have accelerated in the third quarter, with management expecting a 6.5% to 7.0% systemwide same-store sales gain against a 3.7% comparison (better than our 6% estimate). Third-quarter company-owned same-store sales guidance was set at 5.0% to 5.5% against a 2.2% comparison, with traffic trends accelerating somewhat from the second quarter. Guidance implies franchised comps will once again outpace company-owned comps, as has been the case for at least 10 straight quarters, with franchised comps implied at a 7% to 8% gain. We believe the continued relative outperformance of franchised locations serves as a positive indicator on El Pollo Loco’s growing brand awareness and acceptance in emerging markets, as roughly 40% of franchised locations are outside Los Angeles (versus about 20% of company-owned locations).”

Zackfia continued, “We expect investors will be heartened by El Pollo Loco’s accelerating comp trends into the third quarter. While El Pollo Loco’s stock trades at a premium multiple of 24 times our 2015 EBITDA estimate, we believe the valuation can be justified by the company’s leverage to ongoing secular trends in the restaurant industry that include 1) a rising appetite among consumers for healthier fare; 2) an increasing preference for fresh, hand-prepared, made-to-order menu items; and 3) the growing popularity of both chicken and Mexican cuisine in the United States. In addition, we are optimistic that ongoing menu innovation (such as the recent carne asada limited time offer) and upcoming easier comparisons could provide upside to estimates in the near term, with new unit maturation in new markets potentially adding an incremental comp tailwind to our estimates in future years (particularly 2016).” 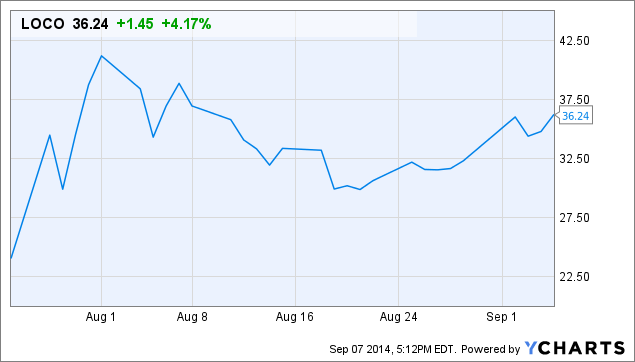