In a research report published Tuesday, Oppenheimer analyst Brian Nagel upgraded shares of Conn’s Inc. (NASDAQ:CONN) from Perform to Outperform, with a new price target of $39, which implies an upside of 27% from current levels.

The analyst believes that CONN is speculative but intriguing at current levels. His favorable outlook represents a shorter term, speculative call on shares and hinges primarily upon his view that the market is under pricing the potential for CONN to successfully divest its Credit portfolio and subsequently garner a higher multiple for its remaining, core Retail operation.

Nagel wrote, “CONN has lately represented one of the most volatile and controversial small-cap investment stories in the Hardlines sector. The combination of still seemingly solid Retail growth prospects and softer Credit trends is likely to fuel the bull-bear debate on CONN for some time. Our rating upgrade to Outperform from Perform reflects a short-term, speculative call on shares and is predicated on our view that the market is currently underpricing the potential for CONN to successfully divest its loan portfolio.”

“Fundamental risks remain for CONN. That said, we expect that investors would look more favorably upon potentially enhanced EPS and cash flow prospects of a CONN business model unencumbered by an at-times volatile in-house sub-prime lending division.”, the analyst added. 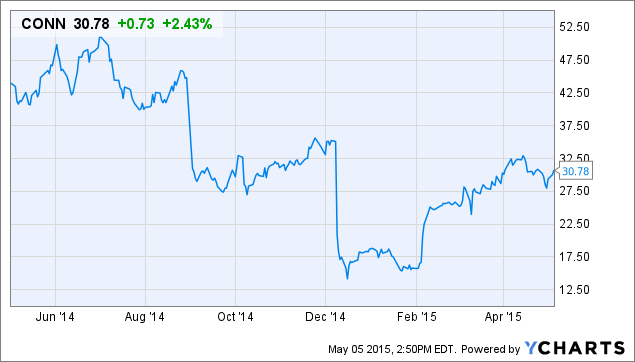 Zacks’ Bear Of The Day: Conns