What to Expect Ahead of Apple Inc.’s First Quarter Earnings: Piper Jaffray

Piper Jaffray analyst Gene Munster weighed in today with his views on Apple Inc. (NASDAQ:AAPL), as the company is scheduled to report its fiscal second-quarter earnings results on April 27 after the market close.

The analyst expects the company will report revenue in line with Street estimates of $55.6 billion and guide Jun-15 up by 1% at the high end of its guidance. Munster believes the slight guide-up will be driven by continued strength in iPhone 6 and an early read in Apple Watch sales.

Beyond the report and guide, “We believe investors are trying to figure out how to think about the impact of the iPhone 6/6+ lifecycle and its impact on iPhone market share. Overall, we believe there could be some modest upside to the rest of CY15 and CY16 based on iPhone market share declining at a slower rate than other cycles, which we believe helps the upside case for the stock.”, the analyst wrote.

Heading into Mar-15 earnings, the analyst believes that the biggest investor questions are around what Jun-15 and Sep-15 iPhone units look like as we enter a typically slower period in the iPhone cycle ahead of the fall update. He noted, “Our take is that it is really a question of market share in the June and September quarters, which are typically the lowest market share numbers for iPhone through a given year. Over the last two years, June/September market share has been four ppts lower than March. If the iPhone 6/6+ cycle is fundamentally different than prior cycles given the larger screen size, which we believe is true, then market share in June and September could be higher than historical norms.”

Munster rates AAPL an Overweight with a price target of $160, which implies an upside of 27% from current levels. 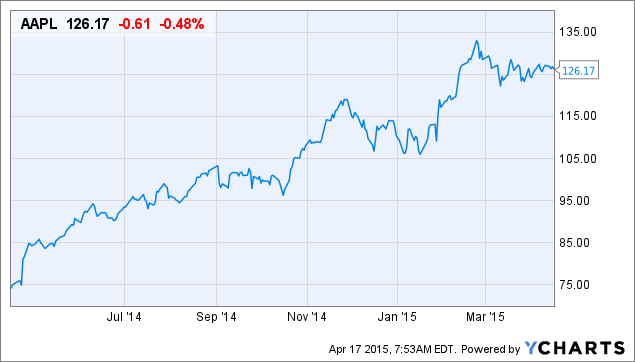