In a research report released Wednesday, Oppenheimer analyst Rupesh Parikh reiterated an Outperform rating on Whole Foods Market (NASDAQ:WFM) and raised his price target to $55 (from $50), which represents a potential upside of 15% from where the stock is currently trading. The report comes after the analyst has received a large number of investor inquiries lately regarding potential reasons behind the recent comp acceleration at WFM.

Parikh commented: “We believe the improvement likely reflects a multitude of factors. These include: 1) A quickly improving backdrop for consumer spending; 2) A pick-up in restaurant sales lately; 3) Potential benefits from management initiatives; 4) Less cannibalization; and 5) Likely continued consumer trade-up within store and potentially to WFM from other retailers. We believe the most interesting finding from our work is the significant correlation between WFM comps and restaurant sales over time. During the month of Oct., WFM’s comp pick-up coincided with the largest increase for restaurant sales on a two-year stacked basis all year.”

The analyst explained his new price target, saying “We are lifting our PT on shares to $55, which assumes shares trade at a high 20’s multiple, consistent with historical levels. Please see our report titled Bottom Still in, But Timing of Next Potential Move Higher Less Clear (11/3/14) for a more detailed update on WFM.” 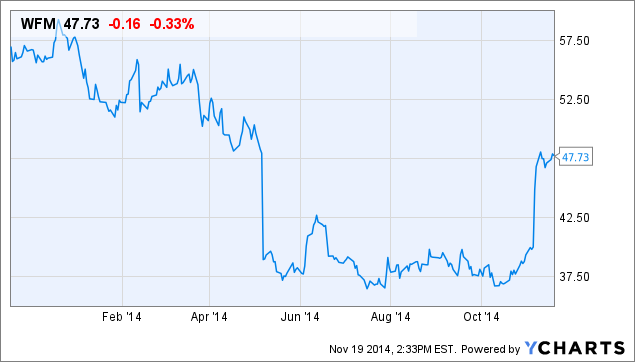