BTIG analyst Walter Piecyk came out today with his thoughts on Apple Inc. (NASDAQ:AAPL), after first-quarter results of AT&T Inc.(NYSE:T) and Verizon Communications Inc. (NYSE:VZ) haven’t been strong indicators for Apple. The analyst points out that there are plenty of factors that could offset AT&T and Verizon’s weakness, like T-Mobile and China, but he thinks it is important to highlight the slowing smartphone sales at two of Apple’s largest customers. Piecyk wrote, “AT&T and Verizon both reported a decline in their post-paid phone subscriber base in Q1. Their customers might have converted to pre-paid, but it’s more likely that T-Mobile is continuing to feed off their subscriber base and will report higher than expected smartphone sales on Tuesday morning, but that will be after Apple reports on Monday night. T-Mobile still might not be big enough to offset the slowdown at the dominant carriers, with less than 20% share of smartphones sold in the United States.”

The analyst continued, “The bigger investor concern in Apple is their ability to grow iPhone sales AT ALL in the December quarter. We believe the new phone payment plans of operators will stimulate faster upgrade cycles, assuming Apple can continue to deliver incremental improvements to the market. It’s important to note that even Verizon has now fully embraced these EPS enhancing phone payment programs, which we think will ultimately stimulate faster replacement cycles. We also believe Apple has more room for market share gains, in part helped by the launch of interesting complementary products like the Apple Watch. With that said, this is a trend that bears watching.”

Piecyk rates Apple shares a Buy, with a price target of $150, which represents a potential upside of 16% from where the stock is currently trading. 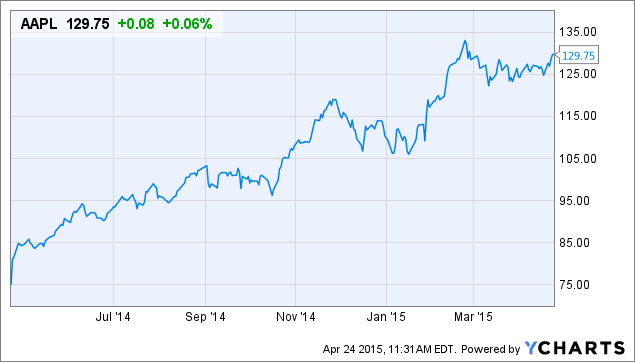