Wedbush’s healthcare analyst Zarak Khurshid weighed in with a few insights on OvaScience Inc (NASDAQ:OVAS), after the company announced positive analysis of its AUGMENT fertility treatment, which seeks to improve egg health by injecting healthy mitochondria from the patient’s own body into the egg to boost its energy so it can reach the implantation stage without developing chromosomal abnormalities along the way.

Khurshid wrote, “While positive egg splitting results were mostly expected, they appeared slightly better than we were expecting. We were encouraged that the egg characterization protocol more heavily weighted preimplantation genetic testing, which is a more objective measure of embryo quality versus morphology. The egg allocation study results demonstrated that of the 106 eggs treated with standard IVF only two embryos (~2%) were deemed viable for transfer while the 171 AUGMENT treated eggs resulted in14 viable embryos (~8%).”

Overall, “The clinical performance history outlined in the paper was consistent with everything we knew as of June 2015. Of note, the company said that six live births have been reported between Fakih IVF and TCart clinics, which we believe puts OVAS on track to achieve around a 10% live birth rate success rate per AUGMENT procedure.”

The analyst maintained an Outperform rating on OvaScience stock, with a price target of $46, which implies an upside of 118% from current levels. 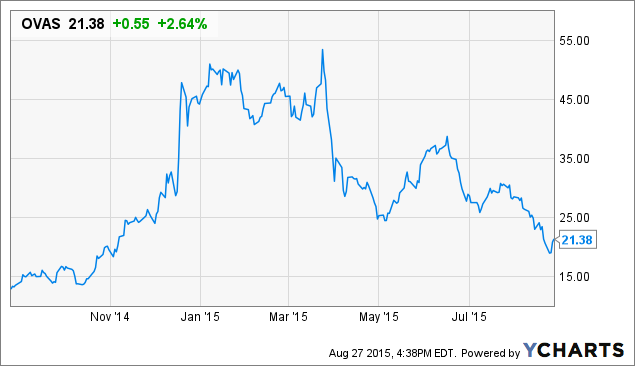