Wedbush Sets Expectations on GoPro Inc Ahead of Earnings

Wedbush analyst Michael Pachter came out with his prediction on GoPro Inc (NASDAQ:GPRO), as the company is scheduled to report its earnings results after the market close on Tuesday, April 28. The analyst expects upside to the first-quarter earnings, driven by untapped demand for the HERO4 and entry-level HERO. Pachter also expects initial second-quarter guidance well above consensus.

Pachter noted, “Our estimates are for revenue of $340 million and EPS of $0.17, vs. consensus of $340 million and $0.18, and guidance of $330 – 340 million and $0.15 – 0.17. Demand for GoPro products appeared brisk throughout Q1, with the sales ramp in China helping. We do not expect competition to have a material impact on GoPro sales near-term, as alternative products don’t match the value proposition of the entry-level HERO, nor the feature set of the high-end HERO4 products. More importantly, competing products don’t match GoPro’s consumer appeal.”

Furthermore, “We expect guidance of $350 million or above, as an increasing presence internationally more than offsets any F/X drag. A contribution margin of 30% on the midpoints of Q1 guidance implies EPS guidance of $0.18 vs. consensus of $0.15.”

Bottom line: “We do not expect GoPro shares to appreciate meaningfully until insider sales abate and the company is able to diversify its revenue stream beyond cameras and accessories, placating investor fears about revenue concentration. We do not see HEROCast as the answer due to its small target audience and $7,500 price tag.”

Pachter maintained an Outperform rating on GoPro, with a $70 price target, which implies an upside of 56.5% from current levels. 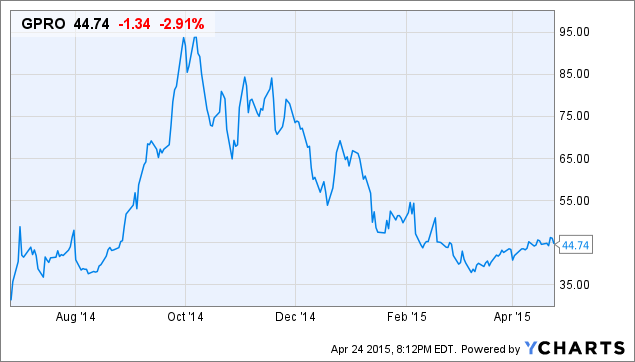