In a research report published Monday, Wedbush analyst Morry Brown maintained a Neutral rating on Gap (NYSE:GPS) with a $45 price target, on the heels of the company’s poor August sales report, as all three divisions missed consensus estimates.

Brown wrote, “GPS reported a -2% comp for August, missing consensus estimates for +1.6% and our +0-2% estimate. All divisions missed consensus expectations and slowed sequentially from July, though ON was the lone division to remain positive for August and momentum at ON continued with a particularly strong sales performance over Labor Day.”

Brown continued, “Our Neutral rating on GPS has largely been reflective of concerns around ongoing merchandise challenges at Gap and the ability for the company to flip the product execution switch immediately with new September deliveries (hitting stores this week). The soft August comp speaks to the challenges of such a tight timetable for a product turnaround. Carryover inventory from August will now need to be promoted to spur sales, which is likely to negatively impact sales of new deliveries, at least for the first few weeks of September. We believe this pushes back the timing of a meaningful improvement in full price selling at Gap.” Brown added, “Our Neutral rating is based on a constructive view of long-term fundamentals, offset by challenges in the current merchandising at Gap brand, which we expect to hold back top-line growth and EPS upside in the near-term. We expect 300 bps of EBIT margin expansion over the next 3-4 years based on initiatives that will expand capabilities across (1) Omnichannel, (2) supply chain and (3) seamless inventory. We believe these initiatives will put the company on more equal footing with global retail peers and provide a competitive advantage versus smaller volume domestic peers.”

According to TipRanks.com, which measures analysts’ and bloggers’ success rate based on how their calls perform, analyst Morry Brown has a total average return of -6.6% and a 37.5% success rate. Brown is ranked #2954 out of 3273 analysts. 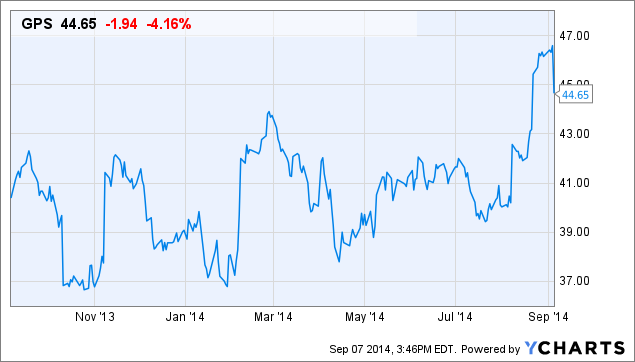 Wells Fargo: 3 Stocks That Could Climb Over 50%