Wedbush analyst Liana Moussatos weighed in today with her views on Pacira Pharmaceuticals Inc (NASDAQ:PCRX), as Symphony Health’s EXPAREL volume and sales estimates for August decreased month-over-month (-2.6% from July) along with other hospital pain treatments.

Moussatos noted, “Despite the drop in August, Q3 is tracking in-line with consensus of about $58.2 million based on historical capture rate ranges. However, we remain cautious on using the SH data as an accurate representation for true sales as it has historically captured a wide range (68.5%-108%) of EXPAREL sales–due to the manner in which SH data is collected and audited– particularly on a month-to-month basis. We estimate that there were 21 selling days in August.”

“In addition to Symphony Health estimates for monthly EXPAREL sales, Pacira guided to initiation of additional Phase 3 trials testing EXPAREL in upper and lower extremity nerve block indications by year-end and reiterated plans to release top-line data from the Phase 3 study of EXPAREL in oral surgery around YE:15 / Q1:16,” the analyst added.

Moussatos reiterated an Outperform rating on Pacira Pharmaceuticals shares, with a price target of $106, which represents a potential upside of 84% from where the stock is currently trading.

Out of the 10 analysts polled by TipRanks, 7 rate Pacira stock a Buy, while 3 rate the stock a Hold. With a return potential of 31%, the stock’s consensus target price stands at $75.50. 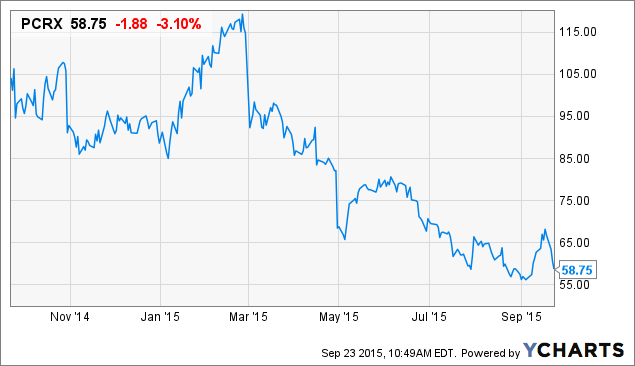