Wedbush analyst Betsy Van Hees reiterated a Neutral rating on Intel (NASDAQ:INTC) and raised her price target to $36 (from $33), as the company hosted its 2014 Investor Day at the company’s headquarters in Santa Clara.

Van Hees noted, “While we came away from INTC’s analyst day impressed with the considerable traction and growth opportunities in Data Center, we still need the consumer to come through this holiday season to absorb the channel fill and even though 2015 revenue was above the Street, implied GAAP EPS is roughly in line with the Street’s and our estimate of $2.38.”

The analyst explained her new price target, “Our new 12-month price target of $36 (from $33) is based upon about a 15x (from 14x) multiple of our 2015 GAAP EPS estimate of $2.38 (unchanged). Historically, during the last 5 years roughly 88% of the time INTC traded between 8x to 15x and in the LTM about 96% of the time traded between 11x to 15x. We believe given the uplift from the corporate PC refresh and Data Center traction that INTC should trade at the high end of its blended 5-yr. range.”

You may also be interested to read these articles: 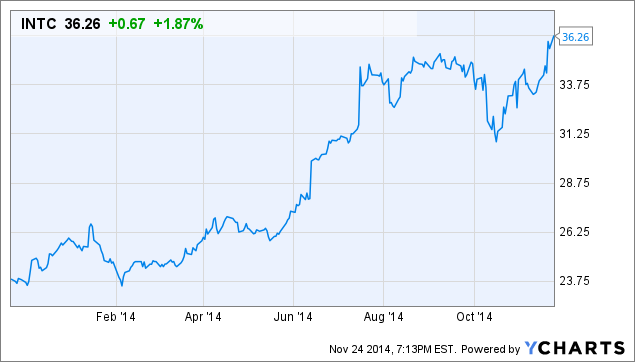