Wedbush’s healthcare analyst Liana Moussatos came out with her views on XOMA Corp (NASDAQ:XOMA), after the company reported its fourth-quarter results, posting revenues of $4.3/$18.9MM compared to consensus estimates of $10.7MM/$25.2MM. XOMA shares are currently trading at $3.66, down $0.12 or 3.17 percent.

The analyst reiterated an Outperform rating on the stock with a $17 price target, which represents a potential upside of 353% from where the stock is currently trading.

Moussatos noted, “We have updated our model to include 2015 guidance for anticipated cash used in operations ($60-65 million, includes expected license and contract related revenue) and based on this guidance, we project cash runway through the end of 2015.” Furthermore, “We continue to wait for material catalysts from EYEGUARD-B. While it is possible for the final exacerbation in EYEGUARD-B to occur near-term, it seems that the bolus of patients Servier enrolled in late Q4:14 have not yet had a material impact on the “handful” of flares needed to complete the trial. Now, with “less than a handful” of flares needed, the final exacerbation plus data release six weeks later may occur in Q2, but could also be pushed into H2:1 5.” 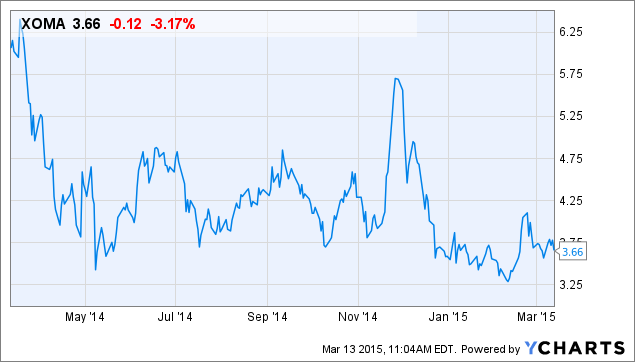