In a research note published today, Wedbush analyst Morry Brown reiterated an Outperform rating on Ross Stores (NASDAQ:ROST) and increased his price target to $87 (from $83), which represents a 15.2% upside from where the stock is currently trading.

Brown noted, “We remain confident in the company’s long-term unit growth opportunity and market share gains, along with management’s steady/conservative operating strategy. Near-term, we continue to expect ROST to deliver upside to current guidance; our estimates remain above consensus for 3Q14 and 4Q14.” Brown added, “Our OUTPERFORM rating reflects (1) an attractive long-term story, as the off-price retailers continue to gain market share based on a compelling value equation for customers, (2) expectations for 2014 EPS upside given conservative guidance and our view of continued solid near-term fundamentals and (3) shares trading at a discount to TJX. As EPS beats resume, we expect the company’s multiple to converge with TJX.”

The analyst continued, “Fear of overcapacity within the off-price space remains a central question for long-term investors, given growth plans for ROST and its competitors. We believe these concerns are overblown and do not expect capacity to be an issue for ROST over the next 3-5 years. Management noted the following points: (1) CA and FL, two of the company’s most mature markets, have comped in line to above the chain in recent years, suggesting a lengthy growth runway for less mature markets, (2) 33% of the company’s doors currently operate as cotenants with TJX, demonstrating the company’s ability to thrive against direct competition and (3) ROST only operates in 33 states currently, allowing for a significant amount of greenfield opportunity.” 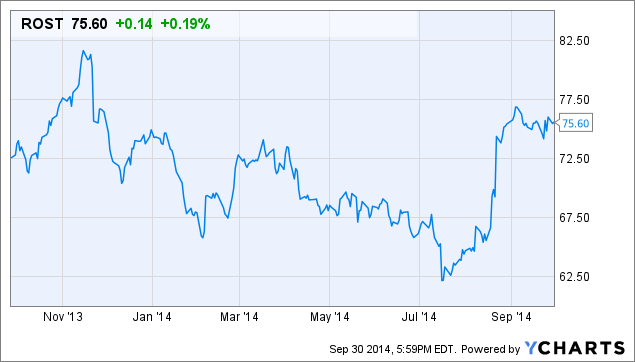