In a research report issued today, Wedbush analyst Liana Moussatos reiterated an Outperform rating on Intercept Pharmaceuticals Inc (NASDAQ:ICPT), with a price target of $493, following the company’s fourth-quarter financial results and update on its pipeline.

Moussatos observed, “The company ended 2014 with about $239.7MM in cash which, with the $191 million financing in February, we project will last into mid-2017—which includes potential launches of OCA for PBC in the US and Europe. Furthermore, “The company continues to guide towards finalization of the Phase 3 trial design for OCA in NASH and completion of NDA/MAA submission for PBC in OCA by end of Q2:15. In our view, announcement of the completion of the design of the Phase 3 trial and confirmation that a pre-approval cardiovascular study is not required could provide immediate uptick in ICPT’s valuation.”

“Additionally, we believe that if the FDA includes reversal of fibrosis as one the primary endpoint – we currently believe it will–we could see a downtick in the valuation of other NASH players given the higher bar set for approval.”With completion of the two Phase 1 trials for OCA in PBC, we believe the company is set to complete the NDA/MAA submission by H1:15. We currently anticipate launch in early 2016, and project WW peak sales could reach $2.4BN in 2022. We project OCA/NASH US launch in Q1 2018 and gross peak worldwide sales could reach over $3BN.” 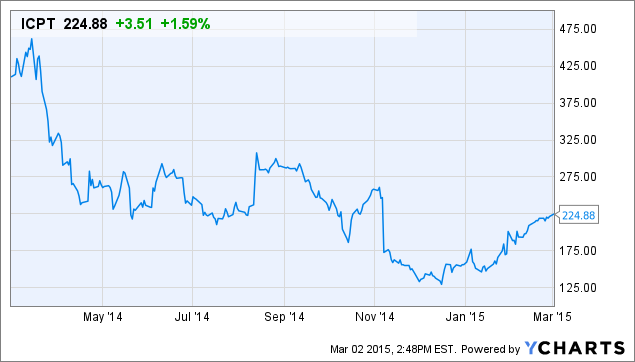