In a research note issued Tuesday, Wedbush analyst Liana Moussatos reiterated an Outperform rating on XOMA Corporation (XOMA) and a price target of $14.00, following the news that the last exacerbation event for XOMA’s Phase 3 EYEGUARD-B trial has not yet occurred. Even with a delay, the analyst anticipates EYEGUARD-B data release by the end of Q3. Previously, the company estimated that the last event would occur in June, but due to seasonality, the exacerbation event rate for the Behçet’s uveitis patients in EYEGUARD-B has slowed and they are waiting for a handful of events to complete the trial.

“We anticipate that the last event for the Phase 3 Gevokizumab in Behçet’s uveitis (EYEGUARD-B) is likely to take place in the next few weeks. Allowing for data processing, we anticipate results are likely to be released sometime between mid-August through September. Recall that all seven patients in Xoma’s pilot study for Behçet’s uveitis and all 21 patients in Servier’s Phase 2 study responded to a single dose of Gevokizumab. We consider this the most material catalyst for Xoma in 2014”, Moussatos noted.

According to TipRanks.com, which measures analysts and bloggers success rate based on how their calls perform, analyst Liana Moussatos currently has an average return of 65.4% and a 73% success rate. Moussatos has a -5.6% average profit recommending XOMA, and is ranked #12 out of 3135 analysts. 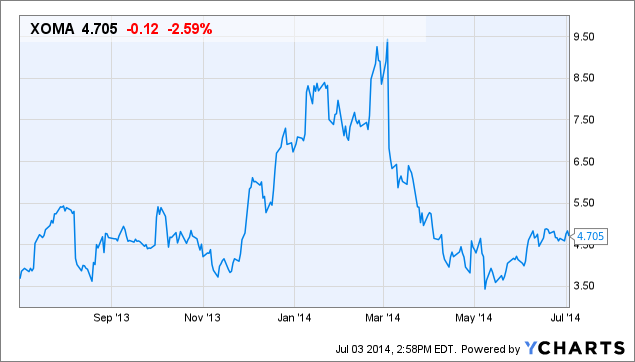