In a research note published yesterday, Wedbush analyst Liana Moussatos reiterated an Outperform rating on Sangamo BioSciences (NASDAQ:SGMO) and raised her price target to $28 (from $27), which represents a 121.34% upside from where the stock is currently trading.

Moussatos wrote, “Sangamo Biosciences (SGMO) is a true biotech company, in our view—leveraging their proprietary state-of-the-art zinc finger technology platform to develop potentially transforming treatments and potential cures for difficult unmet medical needs. Their lead clinical program is currently in Phase 2 clinical trials testing a zinc finger nuclease (ZFN)-modified cell therapy for HIV-infected patients to render and maintain them resistant to HIV infection without drug treatments. Initial compelling clinical results suggest the modified cells successfully reconstituted their immune system and reduced viral load to undetectable in several patients from the ‘902/cohort 5 study. One patient (heterozygote for ∆32) has remained undetectable for over 1 year and counting as of September 2014 and four Cytoxan preconditioned (two heterozygote for CCR5∆32 and two CCR5wt) HIV patients from the ‘1101 study have maintained viremia control for at least 16 weeks (one for 39 weeks)—all without HIV drug treatments. Since it takes 6-8 weeks to collect, manipulate and dose each patient, we believe this durability suggests Sangamo’s approach is commercially viable and has the potential for premium pricing. The company is conducting two Phase 2 trials (SB-728-902/ NCT01252641 and SB-728-1101/ NCT01543152). The company recently announced that three patients in the ‘1101 CTX Phase 2 had up to 1.9 logs drop in viral load after ART treatment interruption and two of the three remain at low enough viral load levels to stay off drug treatment (despite not quite being undetectable).The company plans to test an additional 12 patients at higher doses of Cytoxan and we look for achievement of either durably low (or preferably undetectable) viral load levels to maintain drug treatment interruption. We look forward to seeing additional results from the ‘1101 higher dose cohorts in early 2015. We believe positive results (undetectable viral load for at least 12 weeks) from non-CCR5 delta-32 heterozygotes could be transforming as these represent 90-95% of HIV infected patients and could significantly increase the utility of Sangamo’s approach to creating a functional cure for HIV infection which could reduce or eliminate the need for drug treatments. At the end of Q2 2014, the company had about $236 million in cash. With this cash and potential partnership income to offset burn, we project cash runway for the foreseeable future and cash to cover additional HIV program catalysts as well as initiating clinical development in their multiple monogenic disease and cancer immunotherapy programs.” 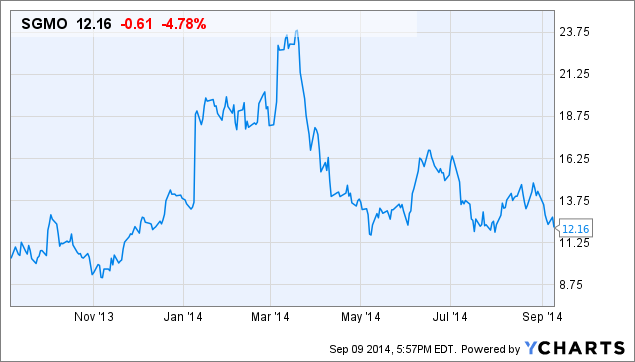 Sangamo (SGMO): TxCell Acquisition Would Strengthen SGMO’s Position as a Leader in the Field of of CAR-Treg Cell Therapy, Says CEO