In a research report published today, Wedbush analyst David Nierengarten reiterated an Outperform rating on Oncothyreon Inc. (NASDAQ:ONTY) and lowered his price target from $6 to $3, following the report that tecemotide failed the Japanese NSCLC Study.

Nierengarten wrote, “Merck Serono said it was reviewing the implications of the Phase I/II results on the tecemotide program, which we believe is likely to be discontinued due to the lack of clinical benefit observed. We have removed future tecemotide-related revenue from our model.” The analyst continued, “ONTY is also planning to initiate a Phase Ib study of ONT-10 with varlilumab from Celldex (CLDX, OUTPERFORM). We note that ONT-10 improves upon tecemotide by having a larger glycosylated fragment of the MUC1 protein which induces both a T-cell and antibody response (tecemotide activates a T-cell response only) and by containing an improved and fully synthetic adjuvant. Testing in animal models has provided evidence of improved activity with ONT-10, with greater anti-tumor activity observed with ONT-10 than with a smaller non-glycosylated MUC1 peptide vaccine that resembles tecemotide.”

Nierengarten added, “Protocell technology, gained as part of the recent Alpine Biosciences acquisition, provides ONTY with a large molecule delivery platform that expands its capabilities into the rare disease space (which has less development risk). We believe protocells can be used to treat the underlying genetic defect by delivering the normal liver peroxisomal enzyme AGXT enzyme into patients, but due to its early status we are heavily discounting the program.”

According to TipRanks.com, which measures analysts’ and bloggers’ success rate based on how their calls perform, analyst David Nierengarten has a total average return of 12.8% and a 55.9% success rate. Nierengarten is ranked #508 out of 3250 analysts. 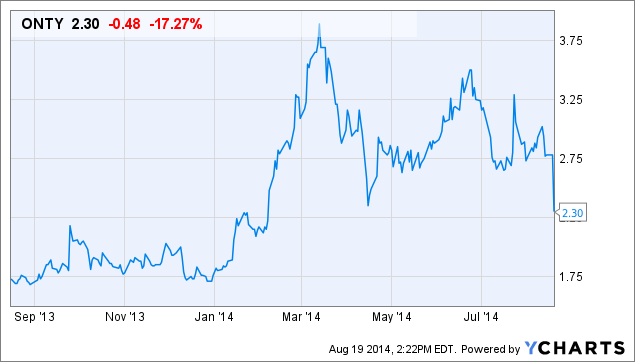