In a research report issued today, Wedbush analyst Joan Storms reiterated an Outperform rating on Five Below (NASDAQ:FIVE) with a $51 price target, following the company’s third-quarter results, posting EPS of $0.06 that was in line with Wedbush/consensus $0.06.

Storms noted, “We had expected volatility around the print and now we have it. We are proponents of the company for its long-term growth potential, attractive and consistent store model, merchandising prowess, and management’s disciplined approach to investing ahead of the growth curve.”

The analyst continued, “We want to point out a couple things that should not be overlooked: 1) the company has a strong talent team and infrastructure in place and the founders will be around to assist with the transition and 2) Black Friday weekend was disappointing overall for most retailers as the season started earlier and the vast majority of the Holiday season is still ahead for FIVE in the month of December.

In closing, “We would recommend buying on weakness for long-term holders although we believe the stock could be range-bound until we see the Q4 results and get official 2015 guidance.” 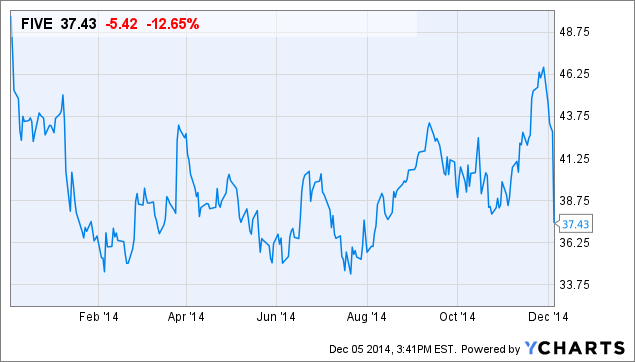 Five Below: The 3Q Release Will Favor The Bears, But It Should Present A Buying Opportunity, Says UBS