In a research note published July 18, Wedbush analyst David Nierengarten reiterated an Outperform rating on Anacor Pharmaceuticals (ANAC) and raised his price target to $35 (from $29), following the news that ANAC granted Sandoz exclusive rights to commercialize Keydin in the US in exchange for $65M and a 50% share of gross profits.

Nierengarten wrote, “We view Sandoz as an ideal partner to market Kerydin for onychomycosis. Sandoz currently sells generic terbinafine (Lamisil), the best-selling onychomycosis treatment that was originally developed by Novartis (the parent company of Sandoz). Sandoz will market Kerydin through its branded dermatology subunit PharmaDerm and is responsible for all commercialization costs and pricing. ANAC said Sandoz will price Kerydin “competitively” with Jublia (efinaconazole), which has an AWP of $2,245 for a 48-week course. We are currently estimating annual per-patient (taking into account patient compliance) revenue of $700 for Kerydin. We expect further clarity on pricing in early August during ANAC’s Q2 earning call”.

The analyst added, “We believe the agreement reduces the commercial risk for ANAC and minimizes financing requirements. We are reducing our SG&A estimates to account for the partnership, and now estimate operating expenses to fall to ~$120M annually in 2014 and 2015. We are removing our prior expectation of a financing round in H2:14, and now forecast ANAC to end the year with $114M in cash. ANAC management stated that the company is expected to have sufficient funds to last through at least YE:16, well beyond the expected announcement of ‘2728 Phase III data in patients with atopic dermatitis”. 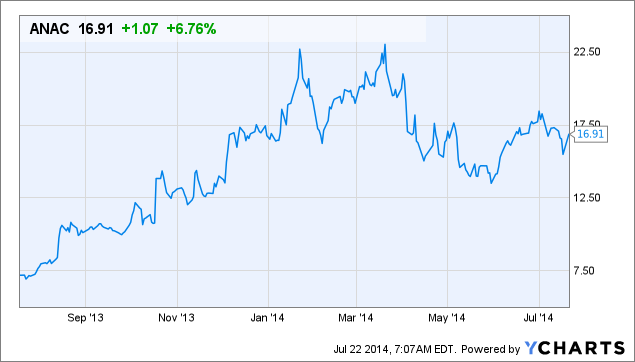