In a research note issued today, Wedbush analyst Liana Moussatos reiterated an Outperform on La Jolla Pharmaceutical (NASDAQ:LJPC) with a $45 price target ahead LJPC’s presentation at the American Society of Nephrology.

Moussatos wrote, “La Jolla’s ASN abstract #3724/TH-PO460 “Galectin-3 Inhibition with GCS-100 Improves eGFR in Patients with Chronic Kidney Disease” will be presented as a poster on Thursday, November 13th at ASN. While the abstract summarizes the previously released 8 week treatment plus 4 week follow-up results in which the 1.5 mg/m2 weekly IV treatment achieved a +1.26 improvement in eGFR versus -0.58 for placebo (p=0.045). However, we anticipate that preliminary results are also likely to be released at ASN from the phase 2 extension of up to 1 year (NCT02155673 on clinicaltrials.gov; acronym GCS-100-CS-4002) after the previously reported 8 week treatment and 4 week follow-up phase. We anticipate the extension phase results are likely to reinforce that the 1.5 mg/m2 is the active dose and provide additional safety results.”

The analyst continued, “The company is developing clinical candidates to treat serious, life-threatening unmet medical needs including GCS-100 for chronic kidney disease (CKD) and an oral formulation (LJPC-1010) for non-alcoholic steatohepatitis (NASH) as well as LJPC-501 for hepatorenal syndrome (HRS) and catecholamine-resistant hypotension (CRH), LJPC- 401 for iron overload, LJPC-201 for hepatic fibrosis (HF), and LJPC-101 for end stage renal disease (ESRD). GCS-100 is one of La Jolla’s lead drug candidates and is an inhibitor of galectin-3, a target in which its over-expression is associated with poor outcomes in chronic organ failure and cancer. GCS-100 is a polysaccharide derived from pectin which binds to inhibits and reduces levels of galectin-3. Elevated galectin has been associated with poor outcomes while its reduction has been associated with favorable outcomes in preclinical and preliminary clinical testing. GCS-100 is currently being tested as a treatment for CKD in a Phase 2a trial and the company reported positive results on March 10, 2014 (NCT01843790 at clinicaltrials.gov). La Jolla’s other lead program is testing LJPC-501 as a treatment for CRH. After a successful placebo controlled pilot trial, the company plans to initiate a Phase III registration trial in H1 2015. La Jolla is also developing LJPC-501 as a potential treatment for hepatorenal syndrome (HRS) and plans to report data from a Phase 1/2 study in late 2014 or early 2015. In addition, the company plans to initiate a Phase 1 study testing LJPC-401 in iron overload in H2 2014 and we anticipate data release in 2015. The company could also initiate a Phase 2 trial in NASH with an oral formulation of GCS-100 called LJPC-1010 in 2014 or 2015.” 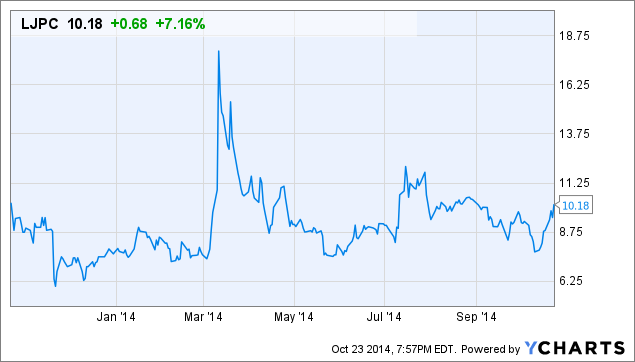