Koenig wrote, “TIBX reported total revenue of $260M in 3Q14, down 4% from 3Q13. Revenue was below consensus of $273M and the bottom end of management’s guidance of $267M – $279M. TIBX reported non-GAAP EPS of $0.14, down from $0.28 in 3Q13 and $0.04 below our estimate and consensus of $0.18. Total software revenue declined 17% Y/Y to $90M, and bookings declined 13% Y/Y to $241M in 3Q14. License revenue decreased 27% Y/Y, blamed on poor execution in Europe in the core infrastructure business and pressure from a secular shift to the cloud. Subscription revenue was in line with our estimates, growing 76% Q/Q to $13M due mostly to the addition of JasperSoft, and secondarily from more Spotfire subscription revenue and contributions from the new Engage marketing solution. Metrics for deal counts and average license size contracted Y/Y.” With regards to why this happened Koenig believes that, “(1) as customers shift spending priorities to cloud efforts, on-premise middleware is getting a low priority – and TIBX appears to be lagging upstart competitors in bringing innovative hybrid integration approaches to the market; (2) an industry-wide transition to time-based revenue is causing customers to scrutinize up-front license spending more closely; and (3) our integrator checks suggest enterprise customers are becoming more open to deploying open source software in production use. TIBX’s move to shift Spotfire licensing to subscription was also a factor in the miss, but the $7M-$8M headwind from this shift was only a fraction of TIBX’s shortfall.”

Koenig added, “We are not sanguine about the company’s ability to garner an offer near the $30 level, as some investors hope; we think the company’s infrastructure assets are becoming less strategic in the market. Also, SAP’s announcement last night of its plan to acquire Concur (CNQR, not covered), for $8.3B may take SAP’s attention away from any other large acquisitions in the near-term. Our valuation work indicates a potential take-out valuation of $22-26, if a deal can be done at all (see our note of September 12th). We don’t expect any quick resolution to this uncertainty, as the process could take several months to play out.” 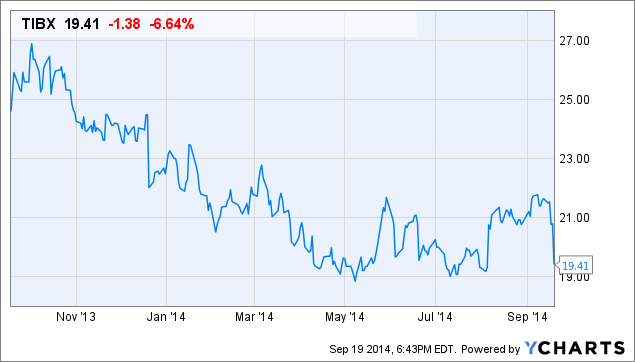