On Friday, Wedbush analyst Michael Pachter issued a note in which he reiterated a Neutral rating on IMAX (IMAX) with a $28 price target, ahead of IMAX’s second quarter earnings report.

Pachter wrote, “We are decreasing Q2 estimates to reflect weaker-than-expected box office results for IMAX. We are also adjusting our expectations for Q3 and Q4 as we gain greater visibility into the IMAX film slate. We expect Q2 revenue of $78 million and EPS of $0.23, vs. prior estimates of $83 million and $0.29, and consensus of $79 million and $0.25. We are initiating FY:15 estimates for revenue of $340 million and EPS of $1.03”. The analyst added, “Despite an increasing backlog and a consistent stream of high-profile theatre signing announcements, management appears content with a slow installation pace that limits long-term growth. That footprint expansion appears to be stuck at around 120 screens per year; with some operating leverage, that suggests to us that IMAX can grow earnings by $0.30 per year long-term once execution improves and the pace of installations increases”.

The analyst concluded, “It is not clear that the IMAX China transaction unlocks significant value that wasn’t already reflected in IMAX’s share price, especially given the per-screen valuation. The stock appears primed to benefit from a strong release slate towards YE, as well as heavily back-end loaded installs andresults”. 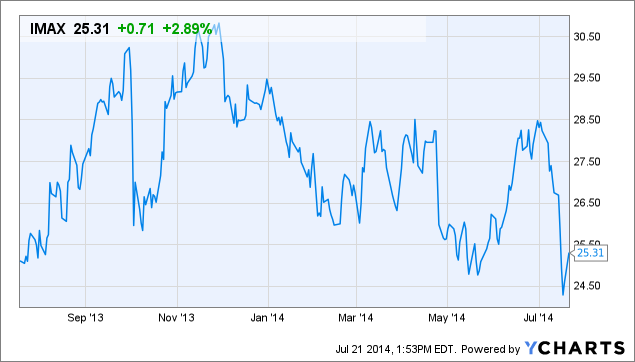