In a research repot published today, Wedbush analyst Steve Koenig reiterated a Neutral rating on Oracle (NYSE:ORCL) with a $42 price target, following the news that the company’s CEO Larry Ellison will now take on the role as the CTO and the CEO role will now be split between the current CFO Safra Catz and President Mark Hurd.

Koenig wrote, “The company didn’t telegraph Larry Ellison’s move to become executive chairman, and the choreography of this transition appeared to us to be abrupt. Mr. Ellison’s desire to delegate more responsibility (and credit) to Safra Catz and Mark Hurd is understandable given his long tenure and ORCL’s maturity, but it underlines our view that ORCL’s days as an organic grower are rapidly coming to an end. We doubt Mr. Ellison has much interest in a management role that has become focused on optimizing the financial performance of a mature technology company. Also, we seek a risk that a co-CEO structure might not be stable for long. We remember vividly the annus horribilis of 1990, in which an unorthodox management structure (the sales organization had its own CFO) resulted in significant problems for management controls for ORCL, resulting in Mr. Ellison’s decision to step down as Chairman. Admittedly, this was a long time ago, but the more general issue is that we believe ORCL has not proven it has the cultural DNA to survive generational change in its leadership.”

Koenig continued, “ORCL reported 1Q15 revenue and EPS slightly below our estimate and consensus. Total revenue was up 2% (in constant-currency) to $8,599M, below consensus of $8,772M and guidance ($8,720M – $8,880M). Revenue was impacted by poor global hardware product sales and technology weakness in the Americas. EPS of $0.62 was up from $0.59 in 1Q14, but below our estimate and consensus of $0.64. Also disappointing was 2Q guidance of $9,280M – $9,650M / $0.68 – $0.72, below consensus of $9,718M / $0.74. We had been hopeful that improvement in the demand environment would trump secular challenges in cloud and hardware. Although cloud subscriptions largely came in line with our expectations, hardware and license revenue was disappointing. Also, database results weren’t as robust as we would have expected given ORCL’s new in-memory and multi-tenant options. We view hardware results as symptomatic of long-term deterioration in the high-end server market. License results may reflect the squirrely nature of an August 1Q, but they are in line with a continuing string of ORCL disappointments, likely reflecting secular challenges associated with a shift to cloud.”

According to TipRanks.com, which measures analysts’ and bloggers’ success rate based on how their calls perform, analyst Steven Koenig has a total average return of 9.7% and a 63% success rate. Koenig is ranked #826 out of 3304 analysts. 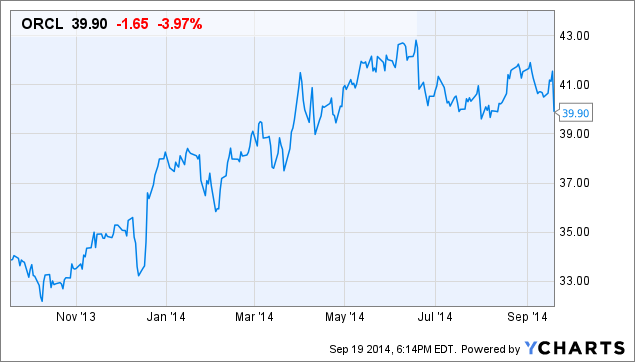