In a research report published yesterday, Wedbush analyst Liana Moussatos reiterated a Neutral rating on Biodel (NASDAQ:BIOD) with a $3 price target ahead of the company’s presentation at the European Association for the study of Diabetes conference.

Moussatos wrote, “The company will give an oral presentation on Thursday (9/18) titled, (Abstract #150) ‘A novel concentrated recombinant human insulin formulation with improved ultra-rapid action for continuous subcutaneous infusion therapy’. This presentation will highlight preclinical pharmacokinetic (PK) and pharmacodynamics (PD) data comparing BIOD- 531 to Insulin U500 (U-500R) and Insulin Lispro (IL) Mix75/25 following administration using pump bolus or subcutaneous injection in a miniature diabetic swine model. Results from this study show that the rate of adsorption and onset of action of BIOD-531 is similar to IL but superior to U-500R. The PK/PD data profiles comparing BIOD-531 and IL are similar. In addition, the company will present a poster on Tuesday (9/16) titled, (PS-074) ‘Biphasic pharmacokinetic and pharmacodynamics profiles associated with concentrated insulin BIOD-531 show rapid onset and basal duration of action’. This presentation will include previously announced positive results demonstrating the superiority of BIOD-531 to Humulin ® U-500 and Humalog® Mix75/25TM in a Phase 1 study in non-diabetic obese volunteers.The results from this trial show that BIOD-531 has a better time to action and elimination profile, and has a similar mild injection site pain as the competing concentrated insulin.”

The analyst continued, “Biodel’s business model leverages proprietary VIAdelTM technology to improve insulins to treat diabetics as well as improving the emergency glucagon system to acutely treat severe hypoglycemia. The company currently has two active programs which we believe they can develop and market on their own. These include the Glucose Emergency Management (GEM) injector pen (BIOD-961) to treat severe hypoglycemia and the concentrated insulin program (BIOD-531) for moderate-to-severe insulin resistance. With timely success in the clinic and regulatory approval, we project Biodel could launch GEM in 2016 and achieve gross peak annual US sales of about $52 million in 2023. For BIOD-531 concentrated insulin to treat severe insulin resistance, we anticipate the company could launch in early 2019 and achieve gross peak annual US sales of about $119 million in 2025. Biodel has other ‘shelved’ programs which require partnerships to continue development and commercialize which we view as call options for investors. With BIOD trading in the recent $1.85-$2.50 range, we believe clinical success with GEM and/or concentrated insulin in a pivotal trial (2015 guided by management for GEM and we estimate in 2017 for BIOD-531 concentrated insulin) could lead to significant upside for the stock. However, considering the company’s history of beginning new programs and either discontinuing or shelving them since Linjeta failed Phase 3 in September 2008, we remain Neutral until we see positive pivotal data on one of the two active programs which Biodel can develop and commercialize on their own (since they have not been successful at partnering).” 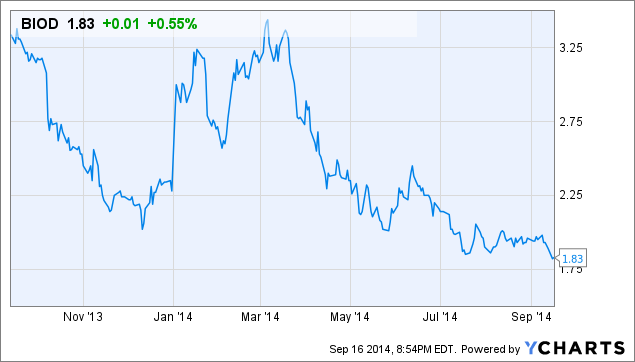