In a research report released today, Wedbush analyst Joan Storms maintained a Neutral rating on Tempur Sealy International (TPX) with a $60 price target. The report follows TPX’s second quarter results, which came in mostly in line with Storms expectations, but sales were better in the U.S., partially offset by some softer business in Central Europe.

Storms commented: “New products are resonating well with consumers and retailers, fueling a rejuvenation of North American sales, and shipments continue to come in in ahead of schedule. Slots per store and distribution points are increasing, which provide good visibility for future sales increases. In addition, TPX-Int’l and Sealy continue to trend positively. While traffic at mattress retailers has been choppy, we remain optimistic that TPX’s new products, with nice aesthetics, in-store marketing, and increased ad spend, will help TPX and industry sales overall, with stronger international sales growth. We see improved visibility for benefits from the merger, including the company’s industry positioning as the largest global player with the most well-known brands, ongoing product innovation, and strong cash flows to support growth while paying down debt”.

The analyst continued, “We are particularly encouraged by the strong performance of the company’s new product lineup in the U.S. North American units were up a strong 9%, which implies good market share gains versus domestic industry unit sales growth of only +0.9%”. 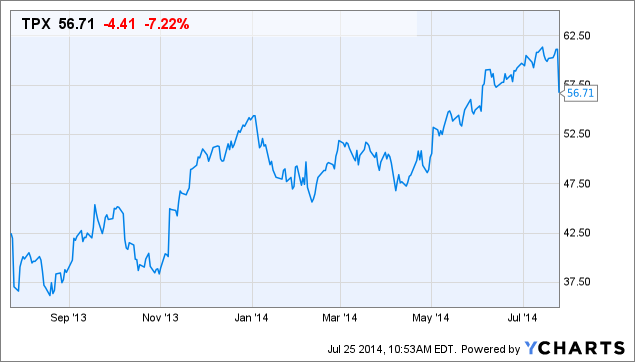