In a research note released today, Wedbush analyst David Rose reaffirmed a Neutral rating on Lindsay Corp. (NYSE:LNN) with a $76 price target, following the release of the company’s quarterly results. The company had an EPS of $0.89 and total sales of $147.5 million.

Rose wrote, “Irrigation sales of $125.8 million were $12.9 million ahead of our forecast, and $20.6 million ahead of consensus. Domestic irrigation sales were $70.7 million, as storm damage revenue contributed an estimated $15-$20 million. International revenues were $55.1 million versus our estimate of $61.9 million. Excluding the impact from storms and the Lakos acquisition, revenues would have declined 11%. Given the weaker backdrop for the farm economy, we expect sales to be under pressure for FY15. We should note that backlog, excluding the Road Zipper Systems order, remains flat with the year-ago period. We are currently forecasting irrigation sales to be slightly down next year (-5.4% in the US, +5.5% international).”

The analyst continued, “Weather plays a significant factor on crop prices and the demand for center pivot irrigation; and severe droughts or floods can impact crop planting, production, and crop prices. All of these can impact net farm income, which ultimately drives demand for center pivot irrigation. Our quarterly and annual views can and are likely to change based on these events.”

According to TipRanks.com, which measures analysts’ and bloggers’ success rate based on how their calls perform, analyst David Rose has a total average return of -32.9% and a 55.6% success rate. Rose is ranked #3309 out of 3335 analysts. 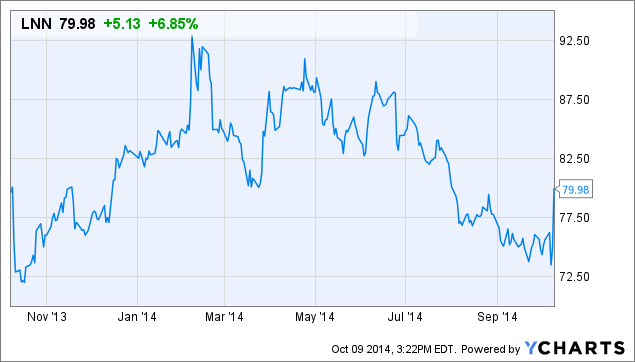