In a research report published yesterday, Wedbush analyst Michael Pachter maintained an Outperform rating on Zynga (ZNGA) with a $7 price target, which represents a potential upside of 146% from where the stock is currently trading. The report comes ahead of ZNGA’s second-quarter results, which will be reported after the market close on Thursday, August 7.

Pachter wrote, “We expect Q2 bookings within guidance, but below our estimate. Our estimates are for bookings of $195 million and EPS of $0.01 vs. consensus of $191 million and $0.00 and guidance of $175 – 195 million and $0.00 – 0.01. Bookings should grow sequentially from $161 million in Q1 driven by mobile, with a new Zynga Poker and Farmville 2 launching in March and April, respectively. Neither game cracked the top 5 spots of the AppAnnie grossing chart on a sustained basis, a position that suggests annualized bookings of $200 million or more. We expected another release late in the quarter, with the Other bookings figure growing YoY, primarily from NaturalMotion licensing. We believe that Zynga will release at least one game in Q3 and another in Q4, allowing it to hit FY guidance”.

The analyst continued, “Zynga overcame a rocky 2013, and CEO Don Mattrick has streamlined the company’s cost structure, stabilized its core business and made several key hires, positioning Zynga to grow revenues and profits in 2014. We think that there is potential for shares to appreciate above our target if Zynga’s management executes on Mr. Mattrick’s plan, as we think that contribution margin on bookings growth can exceed 35%. The flexibility inherent in Zynga’s business model makes a return to profitability in 2014 believable, and now that its losses are behind the company, we think investors will once again pay attention”. 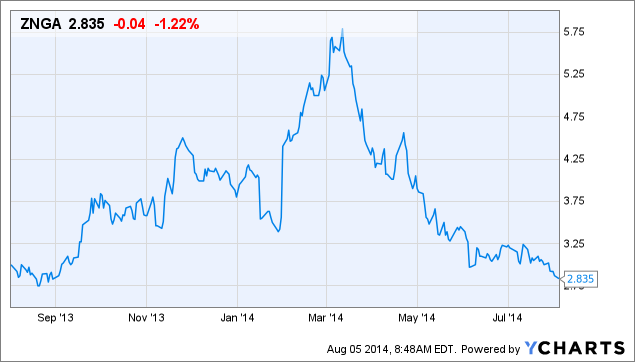