In a research report issued December 7, 2014, Wedbush analyst Liana Moussatos maintained an Outperform rating on Intercept Pharmaceuticals (NASDAQ:ICPT), as the company announced the publication, “Levels of Alkaline Phosphatase and Bilirubin Are Surrogate End Points of Outcomes of Patients With Primary Biliary Cirrhosis: An International Follow-up Study”, which, according to the analyst, affirms that surrogate markers, alkaline phosphatase and bilirubin, are predictive of patient outcomes – which supports ICPT’s OCA clinical program and Subpart H US regulatory strategy for potential OCA approval as a treatment for PBC. No price target was provided.

Moussatos observed, “We believe the current negative investor sentiment concerning a potentially arduous and long NASH clinical program may turn around in 2015 when investors realize that OCA could be on the market for PBC in both the US and EU in 2016. Conclusions from the Global PBC Study Group support Intercept’s clinical design and Subpart H regulatory strategy for OCA treatment of PBC in our view. We anticipate the company to initiate the confirmatory Phase 3 trial for OCA in PBC around year-end. The company has guided toward filing both an NDA and MAA for OCA in PBC in H1 2015. We project WW peak sales could reach $2.4 billion in 2022 after launch in early 2016. Of our $493 take-out value for ICPT, we calculate $180/share value for OCA peak sales in PBC.” 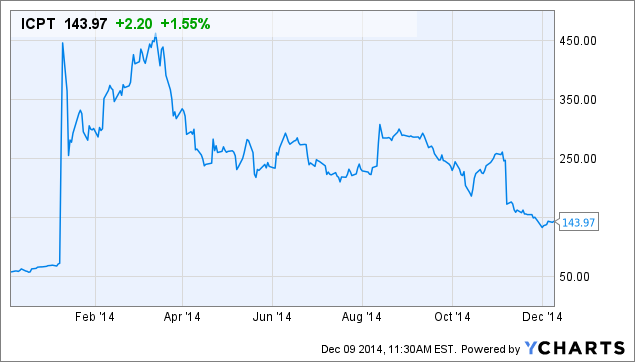