In a research report published yesterday, Wedbush analyst Michael Pachter maintained a Neutral rating on Amazon (NASDAQ: AMZN) with a $330 price target, in light of the news that AMZN has made an agreement to acquire Twitch, a social video platform for gamers.

Pachter wrote, “The acquisition, which has been approved by Twitch’s shareholders, is expected to close in 2H:14. Twitch is an online social video platform that allows gamers to broadcast, watch, and talk about video games. In July, Twitch had over 55 million unique visitors who viewed over 15 billion minutes of content from over 1 million broadcasters. The acquisition of Twitch had been expected for the past few months, although Google had previously appeared to be the leading suitor, with various news reports from as early as May 2014 disclosing that it had offered $1 billion for the service. We think that the acquisition of Twitch fits well with Amazon’s aggressive content strategy, with notable recent events including the expansion of Prime Instant Video (including with HBO content), the introductions of the Fire Phone, Fire TV, and Prime Music, and the increase of the Prime annual membership fee to $99 presumably to help fund the much-improved content slate. Although it is impossible to determine the level of Amazon’s absolute spending on streaming content, we believe that it spent in excess of $1 billion in 2013 for streaming video rights alone.”

The analyst added, “Amazon is a dominant online retailer well on its way to becoming one of the world’s largest retailers, in our view. We believe the company enjoys considerable advantages over its brick-and-mortar competitors, due to its low direct overhead. Amazon management is quite ambitious, expanding into expensive digital media through its Kindle and Fire TV hardware and its Prime Instant video streaming, depressing the company’s earnings power. Similarly, the expansion of Amazon Web Services has thus far been quite costly, although we think that AWS is at a tipping point and will generate significant leverage going forward. In order to take a position in Amazon, we believe investors must make a leap of faith that its revenues will continue to grow and will generate high contribution margin; we have made the leap of faith on revenues, but the lack of visibility on contribution margin gives us pause, and we prefer to stay on the sidelines.”

According to TipRanks.com, which measures analysts’ and bloggers’ success rate based on how their calls perform, analyst Michael Pachter has a total average return of 0.3% and a 46.2% success rate. Pachter is ranked #2064 out of 3261 analysts. 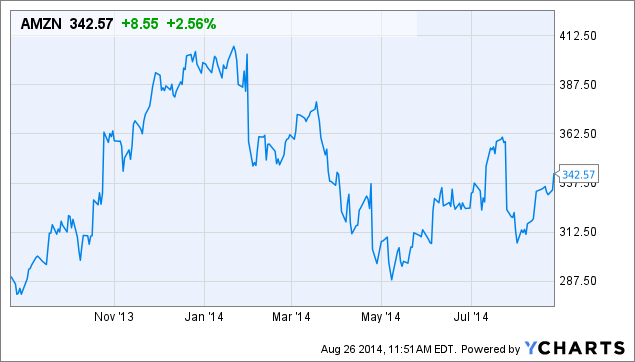