In a research report published today, Wedbush analyst Michael Pachter maintained a Neutral rating on IMAX (NYSE:IMAX) with a $28 price target, following the company’s release of its third-quarter earnings.

Pachter wrote, “Revenue was $61 million, compared with our estimate of $65 million, and consensus of $63 million. Adjusted EPS was $0.11 (excluding a $ 0.04/share charge), compared with our estimate of $0.14, and consensus of $0.12. EPS was below our and Street expectations primarily due to higher-than-expected SG&A. Importantly, the higher SG&A was largely attributable to one-time expenses related to FX as well as additional one- time marketing spend to support Guardians of the Galaxy.“

The analyst continued, “Despite an increasing backlog and a consistent stream of high-profile theatre signing announcements, management appears content with a slow installation pace that limits long-term growth. That footprint expansion appears to be stuck at around 120 screens per year; with some operating leverage, that suggests to us that IMAX can grow earnings by $0.30 per year long-term once execution improves and the pace of installations increases.” 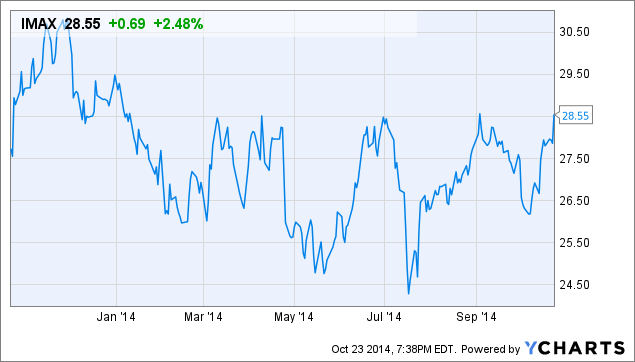