In response, Wedbush analyst David Nierengarten raised his price target for Anacor stock to $190 (from $85), while reiterating an Outperform rating on the stock. The new price target implies an upside of 44% from current levels.

Nierengarten wrote, “Given the strong results seen in the pivotal trials, consistent with that observed in the Ph 2 trials, we believe crisaborole will have a relatively straightforward approval process. We believe ANAC is in position to file an NDA by 1H16 and launch in 1H17. With an estimated $190M in cash and equivalents on hand, we believe ANAC has the financial resources to commercialize crisaborole on its own, and estimate ~$350M in sales in 2017, rising to ~$2B in 2020, our valuation year.”

The analyst continued, “We note that our sales ramp is similar to that observed early in the launch of Protopic and Elidel, the last non-steroidal topical therapies approved for AD. Our sales estimates are based on a $1,500 per patient per year price for crisaborole, conservatively in-line to a small premium to the annualized per patient revenue for Elidel, which is specifically approved for the mild-to-moderate AD population. Crisaborole is covered by a composition of matter patent that expires in 2026 and method of use patents that first expire in 2027.” 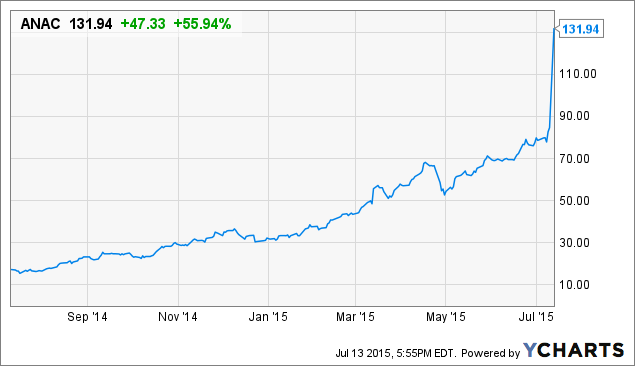