Wedbush analyst Heather Behanna reiterated a Neutral rating on Cubist Pharmaceuticals (NASDAQ:CBST) with a price target of $102, as Hospira (NYSE:HSP) litigation comes to a close – Cubist’s use patents, expiring in 2019 and 2020, have been declared invalid by the courts

Behanna noted, “The litigation outcome is not considered a “Material Adverse Effect” that can derail the merger with Merck. In our view, Merck was aware that exclusivity could end in 2016; we believe this places more emphasis on Sivetro for MRSA and Zerbaxa for gram negative infections. As a reminder, approval of Zerbaxa is widely anticipated to occur by the PDUFA date in two week’s time.”

The analyst added, “Litigation outcome suggests to us another buyer will not come into play. In our view, if other suitors were in the wings, it is likely today’s announcement would temper enthusiasm for a counter offer. We believe Cubist shares will be under pressure in the short term but believe there is a good chance the deal moves forward and closes in 1Q15; as a reminder, a breakup fee for the deal is $250M.”

According to TipRanks.com, which measures analysts’ and bloggers’ success rate based on how their calls perform, analyst Heather Behanna has a total average return of 7.2% and a 50.0% success rate. Behanna is ranked #1938 out of 3401 analysts. 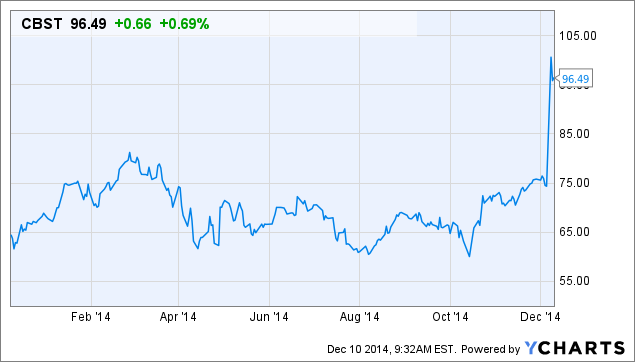