Luria wrote, “We believe VeriFone will continue to overcome its legacy issues, sustain high single digit revenue growth and a steep earnings growth trajectory as margins return to trend-line and beyond.” The analyst continued, “We believe that since Tier 1 retailers only represent 1.8 million of 8 million US installed base of terminals, we are far from saturation. It took three years to get to 30% penetration of the existing base (~2.4 million terminals) and we expect ~2/3 of all relevant locations (10 million which includes locations where card swipe is currently done on cash register) to be EMV compliant within 12-18 months (~6.7 million terminals). If it took three years to get to 2.4 million and over the next one year we may see as much as an additional 4.3 million EMV terminals, we also do not believe the upgrade cycle has peaked.”

Luria continued, “We believe Chinese market has the potential to fuel expanded growth if PAY can compete effectively with a new lower end product. We also believe PAY will continue to see success in Europe given competitive product set and recent wins.” 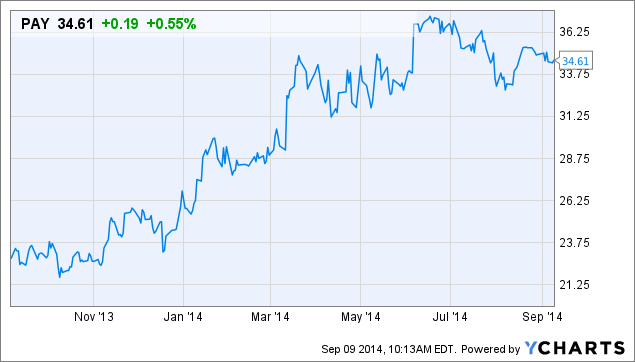