We Would Continue To Be Buyers Of Palo Alto Networks Inc Shares: William Blair

William Blair analyst Jonathan Ho weighed in with a favorable report on shares of Palo Alto Networks Inc (NYSE:PANW), after the company blew away expectations for its fiscal fourth-quarter earnings, posting revenue of $283.9 million, compared to the Street’s estimate of $256.4 million. Pro forma EPS came in at $0.28, above the Street’s $0.25 estimate due to the strong top-line performance and good margins.

Ho wrote, “Palo Alto posted one of its strongest billings quarters, at 69% growth year-over-year, that we have seen from the company, far exceeding consensus expectations on strong demand across the board. Palo Alto is not only benefiting from a strong spending backdrop, but also significant market share gains from both legacy firewall vendors and network security point solution vendors.”

Furthermore, “We were surprised by the level of acceleration the company showed against a tough comparison of 64% growth in the prior-year quarter in billings, demonstrating the degree with which Palo Alto is taking market share from other players. First fiscal quarter 2016 guidance calls for revenue growth of 46% to 48%, which exceeded consensus growth expectations of 40% growth for the quarter.”

Bottom line: “We would continue to be buyers of the stock, particularly given its recent pullback. We see little reason to believe Palo Alto will be affected by macro factors or China-related slowing, which we believe could result in sustained outperformance in both the near term and long term.”

According to TipRanks.com, which measures analysts’ and bloggers’ success rate based on how their calls perform, analyst Jonathan Ho has a total average return of 15.3% and a 58.6% success rate. Ho has a 66.0% average return when recommending PANW, and is ranked #582 out of 3754 analysts.

Out of the 27 analysts polled by TipRanks, 25 rate Palo Alto Networks stock a Buy, while 2 rate the stock a Hold. With a return potential of 5.7%, the stock’s consensus target price stands at $187.58. 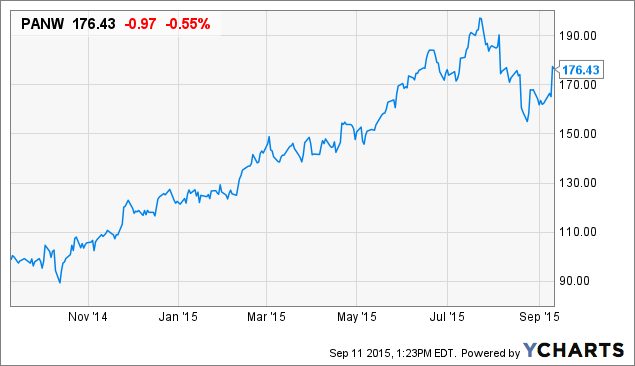