Synergy Pharmaceuticals (NASDAQ:SGYP) price target has been increased at Cantor analyst by research analyst Irina Rivkind Koffler from $8.00 to $14.50, while the rating remains at Buy. The increased price target comes after the company announced positive Phase III efficacy results from its first 1,346- patient trial of plecanatide in chronic constipation. The results were sufficient to encourage the market into sending shares up 67.67 percent higher.

Koffler wrote, “We view Synergy as an attractive takeout target following its positive Phase III data in chronic constipation. We believe that there is scarcity value to de-risked late-stage assets in large primary care markets. In particular, we think that plecanatide would be complementary to Valeant’s gastrointestinal franchise after the recent approval of Xifaxan in IBSD.”

Furhtermore, “Plecanatide treats a highly symptomatic illness that is easy to describe in direct-to-consumer advertising, and furthermore, its launch in early 2017 would benefit from the market-building activities of Actavis and Ironwood, in our view. Synergy holds 100% of the marketing rights to plecanatide so the asset is also unencumbered. Finally, we think that Synergy management could be receptive to takeout discussions given that compensation incentives are aligned with a sale of the company.”

All the 4 analysts polled by TipRanks rate Synergy Pharmaceuticals stock a Buy. With a return potential of 9.2%, the stock’s consensus target price stands at $8.50. 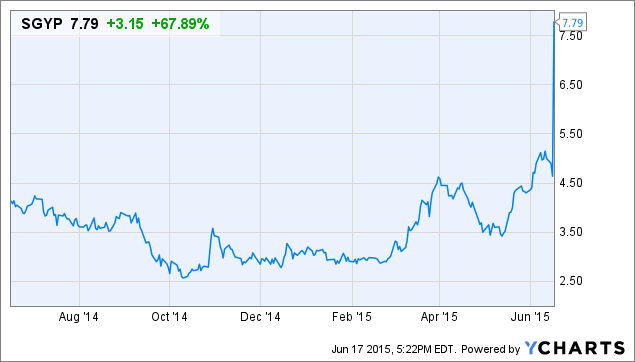