We Sensed Growing Momentum In The Field For F5, Says William Blair

In a research note released this morning, William Blair analyst Jason Ader reiterated an Outperform rating on F5 Networks (FFIV) ahead of the upcoming third-quarter results. No price target was assigned.

Ader wrote, “Our recent round of enterpriseVAR discussions covering NorthAmerica, Europe, and parts of Asia leave us confident that F5 will post strong fiscal third-quarter results (likely above consensus)and provide a positive outlook. Reseller feedback was broadly constructive, with most F5 partners seeing growth in their F5 business in the range of 15%-20% year-over-year. While year-over-year comparisons are benign (given the slowdown F5 experienced last year), and the service provider side of F5’s business (20%-25% of sales) is generally still a blind spot, we sensed growing momentum in the field for F5 and an improving demand environment and pipeline”.

In the near term, the analyst believes F5 will benefit from easy comparisons with last year. Over the medium to long term, he has increasing conviction that the company can deliver midteens revenue and earnings growth, which should drive upside to numbers as well as multiple expansion.

According to TipRanks.com, which measures analysts and bloggers success rate based on how their calls perform, analyst Jason Ader currently has a one-year average return of 15.6% and a 56% success rate. Ader has a 103.1% average return when recommending FFIV, and is ranked #415 out of 3213 analysts. 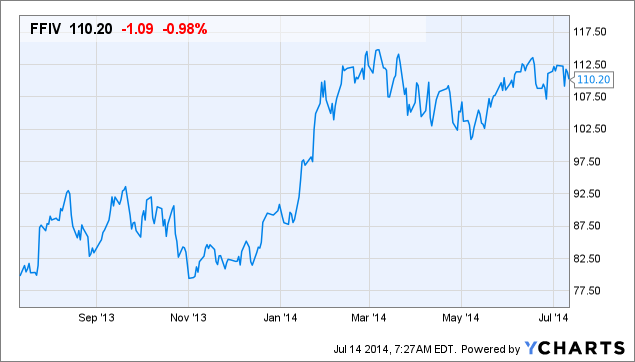