In a research report released today, Roth Capital analyst Chris Lewis reiterated a Buy rating on shares of Exact Sciences Corporation (NASDAQ:EXAS), while reducing the price target to $15 (from $31), after the US Preventive Services Task Force (USPSTF) issued its draft recommendation for colorectal screening guidelines and did not include the company’s Cologuard as an “A” or “B” rated test. Exact Sciences shares reacted to the news, dropping 46.14% to $9.98 on volume of 32 million shares.

Lewis commented, “The USPSTF draft recommendation has designated Cologuard as an “alternative” rather than “recommended” test. Overall, the guidance was not as supportive for Cologuard as we had anticipated and puts into question the rate of commercial insurance coverage and physician adoption Cologuard can secure. That said, we note Cologuard has 57% coverage for its target market today and believe the value proposition to payers, providers, and patients remains attractive.”

“While the USPSTF draft guidance comes as a disappointment for EXAS and will likely slow the rate of commercial coverage and physician adoption if not upgraded to “recommended” designation before the final statement is released, we believe the sell-off is overdone and would be buyers of EXAS at current levels. We have lowered our out-year (2017/2018) revenue projections by 40% to mirror the percentage of Cologuard’s target market covered by commercial insurers and account for modestly lower projected ASPs. Based on our revised financial outlook, we have lowered our target price to $15,” the analyst concluded.

Out of the 13 analysts polled by TipRanks, 6 rate Exact Sciences stock a Buy, 6 rate the stock a Hold and 1 recommends a Sell. With a return potential of 125%, the stock’s consensus target price stands at $22.42. 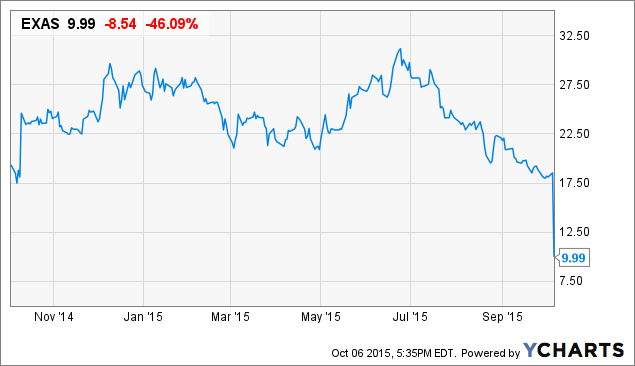