Pantginis wrote, “Amgen (AMGN-NC) announced 2Q14 Kyprolis sales of $78 million, versus our estimate of $83 million. With interim analysis from the Phase III ASPIRE trial and data from the Phase III FOCUS trail both expected 3Q14, a broadening profile for the drug could bolster already healthy sales. We believe current and projected royalty streams will lead to strong projected EPS growth for Ligand”.

Pantginis added, “We believe LGND’s royalty revenue model continues to bear fruit, with both sales of Kyprolis and Promacta coming in strong for 2Q14. With 3Q14 data readouts that could help broaden Kyprolis’s profile and our continued belief that Promacta sales will remain strong, we believe LGND is well positioned. Our Promacta thesis continues to be that we expect some decline in U.S. sales due to increased use of direct antivirals for HepC. However, we expect the slack to be picked up by growing ex-US sales. Ex-U.S. HepC infections are typically caused by non-genotype 1 viruses, which are not targeted by the current antivirals. With current revenue streams from Promacta and Kyprolis, anticipated near-term significant revenue contribution from Duavee and CE Melphalan, and increasing requests for Captisol, we believe LGND is positioned for growth. Other catalysts expected shortly are 3Q14 NDA filing for CE-Melphalan, 3Q14 Phase III data for CE-Delafloxacin IV, 3Q14 FDA action for Promacta in aplastic anemia, and 2H14 launch of Duavee in the E.U”. Pantginis continued, “We recommend steady accumulation of LGND shares, as we anticipate that current revenue streams from partnered products and the broad “in development” portfolio are poised to drive significant growth in the near and longer term”. 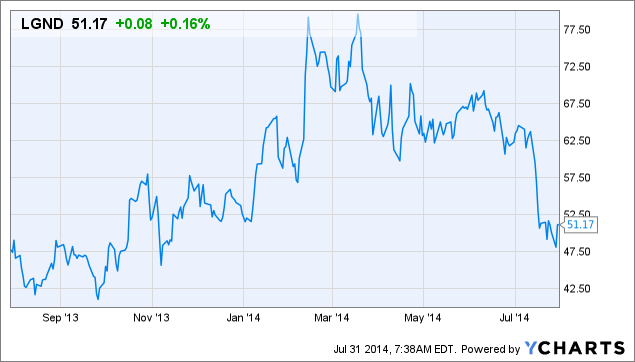