In a research report issued yesterday, Wedbush analyst Betsy Van Hees provided an optimistic view on Broadcom (BRCM) heading into the company’s second-quarter earnings report. The report will be released today at a 4 p.m. The analyst reaffirmed an Outperform rating and raised her price target to $45 (from $43).

Van Hees wrote, “We expect a largely in-line print and guide driven by revenue strength in Infrastructure and Broadband that we believe will be partially offset by the beginning of the tapering of revenue from cellular baseband business wind-down”. She continued, “We don’t expect any negative surprises for Q2 results, which we think will be in line with the Street and our estimates ($0.61/$2.05B) primarily driven by solid performance out of Infrastructure driven by data centers from the public cloud, large-scale data centers, adoption of 10G, and share gains in ASICs and by carriers from base stations, back haul, and core in wireless infrastructure”.

Van Hees added, “While we continue to recognize potential longer-term market share losses at Tier 1 OEMs in mobile connectivity as the biggest risk to our bullish view, we believe if this were to occur, BRCM would take the same action as in the cellular baseband business by significantly reducing investments and further intensifying focus on core competencies and emerging markets like the Internet of Things (IoT). We recommend investors continue to buy shares of BRCM as we believe the removal of the cellular business will enable the company to refocus on its core strengths in Broadband and Infrastructure unlocking considerable value”. 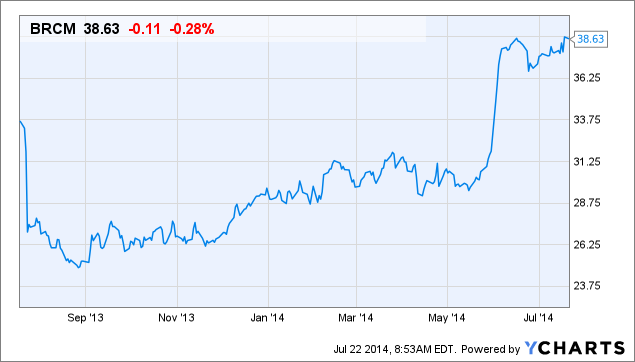