In a research note released August 8th, Roth Capital analyst Matt Koranda maintained a Buy rating on Capstone Turbine Corp. (CPST) and cut his price target to $1.50 (from $1.90), following the disappointing news that CPST missed FQ1 expectations across the board while posting weak bookings.

Koranda wrote, “While we expect near-term weakness in CPST stock, we maintain our positive view over the long run as we believe CPST’s backlog supports our NTM revenue estimates and we anticipate GM improvements to translate into EBIT BE during FH2’15.” Koranda continued, “We expect weakness in CPST shares in the near-term, driven by a disappointing FQ1 print and lower-than-expected bookings. Additionally, we see a lack of major catalysts that could drive the stock higher in the near-term. We maintain our positive view of CPST over a longer time horizon, however, as we still view NTM consensus expectations to be reasonable when compared with CPST’s backlog and we believe poor FQ1 performance appears to be driven primarily by timing and not fundamental demand issues.” 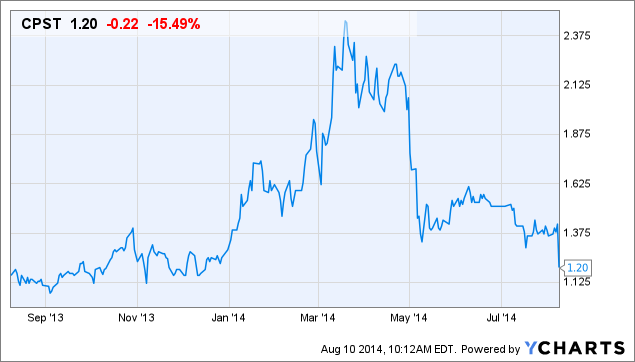