In a research note released yesterday, Wedbush analyst Seth Basham reiterated a Neutral rating on CarMax (KMX) with a $49 price target, which suggests a slight downside to shares.

The analyst continued, “While we like the long-term KMX story and nearterm consensus expectations are not aggressive, we expect used unit comps to sharply slow in 2014 as the benefits from rapidly improving credit availability in the last three years fade. In addition, we expect CAF income growth to sharplyslow in 2014 as spreads compress, penetration growth peaks and loss rates increase”.

According to TipRanks.com, which measures analysts and bloggers success rate based on how their calls perform, analyst Seth Basham has a 10.4% average return and a 90% success rate. Basham is ranked #1161 out of 3216 analysts. 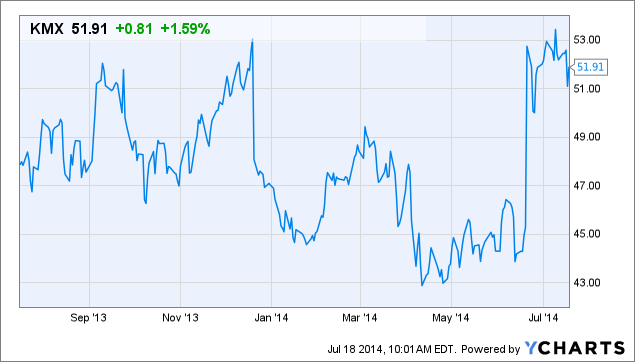 These 3 “Strong Buy” Stocks Could Be Due for a Big Year, Says Stephens