We Continue To View Nordstrom As A Best-In-Class Retailer, Says William Blair

Noblin wrote, “We remain impressed with management’s unwavering customer-centric DNA, which has enabled Nordstromto be a thought leader in channel migration and early-adopter of omnichannel pursuit. While the jury is still out on what e-commerce will ultimately mean for the industry in terms of penetration, return on capital, and EBIT margin, the company is embracingthe opportunity to gain meaningful market share through thoughtful growth and capital allocation. Nordstrom’s initiatives including Topshop, pop-in shops, bauble bar, Rack, HauteLook, and technology investment have enabled the company to serve customers in a way that they want to be served, driving a high level of customer engagement and a multichannel shopper who spends 3-4 times the average. The company believes (as do we) that mobile and personalization will be the next big wave, with mobile allowing associates to drive a new level of customer service. We continue to view Nordstrom asa best-in-class retailer and remain positive on the company’s growth initiatives, which we believe can sustain a mid- to high-teens multiple”.

According to TipRanks.com, which measures analysts and bloggers success rate based on how their calls perform, analyst Amy Noblin has a -18.4% average return and a 0% success rate. Noblin is ranked #3006 out of 3220 analysts. 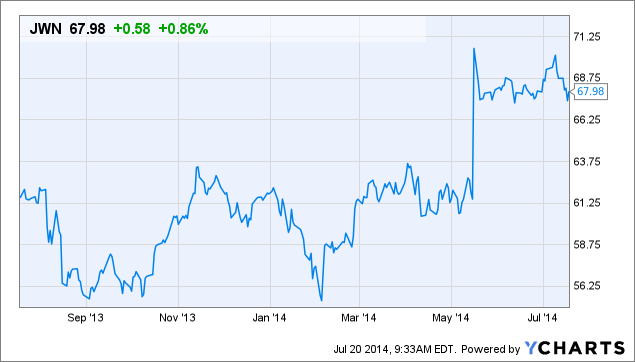 Chart of the Day: Nordstrom, Inc.