We Continue To Believe That Shares Of Agile Hold A Strong Risk/Reward Profile, Says William Blair

Lugo wrote, “The Phase III trial will assess the efficacy of Twirla in preventing pregnancy using the widely accepted Pearl Index as the primary endpoint. The Pearl Index is defined as the number of contraceptive failures per 100 women divided by exposure. The numerator in the index is the number of pregnancies, and the denominator is the cumulative number of months or cycles of exposure from the start of the method until the completion of the study, discontinuation of the method, or pregnancy. As shown in exhibit 1, on the following page, in the past decade, some oral contraceptive products have been approved with overall Pearl rates of about 2.0, while the highest approved upper bound of the 95% confidence interval was 5.03 for Seasonale in 2003. In addition, the most recent approval of a contraceptive was Quartette, which had a Pearl rate of 3.19. We believe that new management, including new Chief Medical Officer Elizabeth Garner, M.D., who came to Agile with an impressive women’s health background, should be able to run a trial focused on achieving an approvable Pearl Index score of less than 3.19 (or lower).”

Lugo added, “We continue to believe that shares of Agile hold a strong risk/reward profile, given the well-defined efficacy of ethinyl estradiol/levonorgestrel products and the clear pathway for approval of contraception products. However, shareholders will likely have to be patient for several months when news flow regarding the company’s main product may be scarce, and share prices of development-stage therapeutics companies tend to trade in line with the markets until a clear catalyst approaches. Ultimately, we believe in the strong management at Agile and view the Phase III study for Twirla as very achievable. After the update Tuesday, the company remains on track with previous guidance to complete the SECURE study by first quarter 2016. As of the end of the second quarter, the company reported cash and cash equivalents of about $53.5 million, which it believes is sufficient to fund operations through first quarter 2016. We therefore maintain our Outperform rating and $18 price target on shares of Agile.”

According to TipRanks.com, which measures analysts’ and bloggers’ success rate based on how their calls perform, analyst Tim Lugo has a total average return of -3.6% and a 46.2% success rate. Lugo is ranked #2831 out of 3298 analysts. 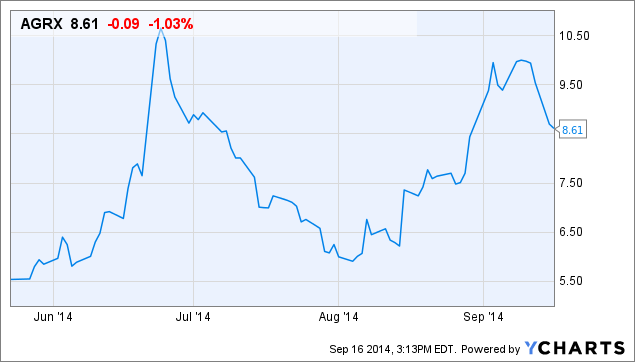