Yesterday, Roth Capital analyst Joseph Pantginis issued a note in which he reiterated a Buy rating on Regeneron Pharmaceuticals (REGN) and raised his price target from $382 to $399 following recent FDA approval for the treatment of DME ahead of the August 18, 2014 PDUFA date, broadening the profile of the already successful drug.

Pantginis wrote, “Combined with the company’s deep pipeline, including significant upside potential from the alirocumab program with Sanofi (SNY-NC) in cholesterol control, we believe REGN is well positioned for EPS growth”. Pantginis continued, “We see the approval of Eylea for DME as a positive for REGN, as it broadens the profile of this already successful drug. Recall that Eylea is already approved in the U.S. and E.U. for wet AMD and macular edema following CRVO. The European CHMP has given a positive opinion recommending Eylea for the treatment of DME, and regulatory submissions have been made in Asia Pacific, Latin America, and Japan. Regulatory submission have also been made in the U.S. and E.U. for Eylea for the treatment of macular edema following BRVO. The U.S. approval in DME is based on the Phase III VISTA-DME and VIVID-DME studies in 862 patients which showed that after one year, the mean change in Best Corrected Visual Acuity was significantly better for patients who received monthly or every two months Eylea injections than for those who underwent laser photocoagulation. Patients who received monthly and every two months Eylea injections gained an overage of two additional lines on an eye chart, versus the patients treated with laser coagulation, who averaged virtually no change on the eye chart. Adverse events, including arterial thromboembolic events, were similar across all three groups. With Eylea’s profile broadening globally, we believe REGN will continue to deliver a strong success story with this drug”. 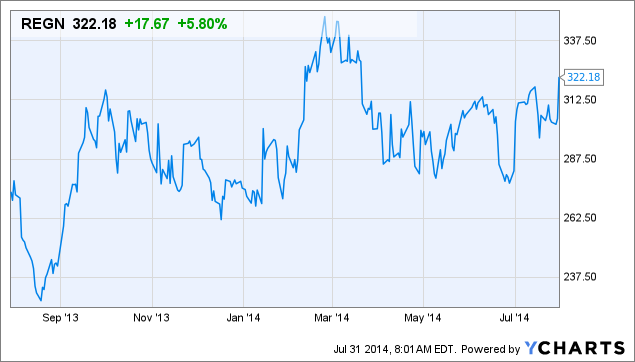