Ader comments: “Management was quick to blame the soft revenue on better-than-expected cloud subscriptions (up 23% year-over-year) and its pro-rated revenue recognition, versus any actual weakening in the business. However, we continue to believe that the cloud is playing a disruptive role in Oracle’s dominant on-premise software business (still more than 89% of new software revenue), opening doors for new competitors, architectures, and pricing models. While engineered systems (ES) performance is helping (total hardware sales up 3%, driven by ES) and Oracle’s large database and middleware businesses remain stalwart, we expect organic growth to remain challenged due to the shift to SaaS, PaaS, and IaaS models. However, we note the potential for additional acquisitions (such as the rumored buyout talks with Micros (MCRS) to boost the numbers.

With average revenue and earnings growth expected at 5% and 10%, respectively, over the next two fiscal years, we believe shares trade roughly at fair value. We note that shareholder-friendly capital allocation policies and strong free cash flow generation should support valuation. For the full fiscal year 2014, Oracle returned 84% of free cash flow to shareholders via dividends and buybacks”.

According to TipRanks, which measures analysts and bloggers success rate based on how their calls perform, analyst Jason Ader currently has a one-year average return of 16% and a 61% success rate. He is ranked #361 out of 3118 analysts. 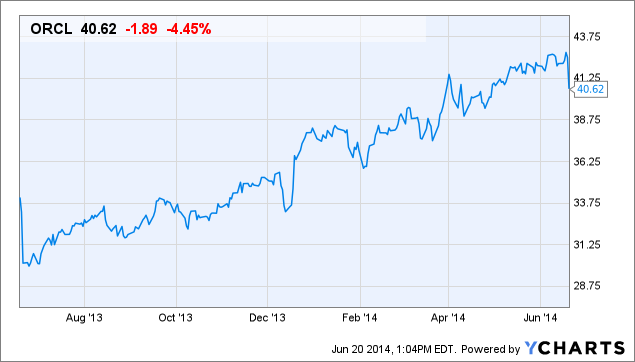