Sarepta Therapeutics Inc (NASDAQ:SRPT) price target has been raised by research analyst Stephen Brozak at WBB Securities. The new price target now stands at $35 (from $25), representing an upside of nearly 40% from the recent price of $25.32. The analyst also maintained a Buy rating on the stock, after the company held a successful pre-NDA meeting with the FDA regarding its lead product candidate, eteplirsen, for treatment of Duchenne muscular dystrophy (DMD).

Brozak noted, “Our premise for SRPT’s valuation remains the principle of a near-term completed NDA filing for eteplirsen, and with the rolling submission filing we now give a greater likelihood to its ultimate approval by the FDA. As In our earlier reports, eteplirsen is the most valuable portion of the SRPT franchise. While we believe that rolling submission NDA filings in themselves are not signals of approval certainty, we do believe that the FDA’s senior staff participation is at the very least an indication of the agency’s interest in providing a rapid answer when the NDA is complete.” 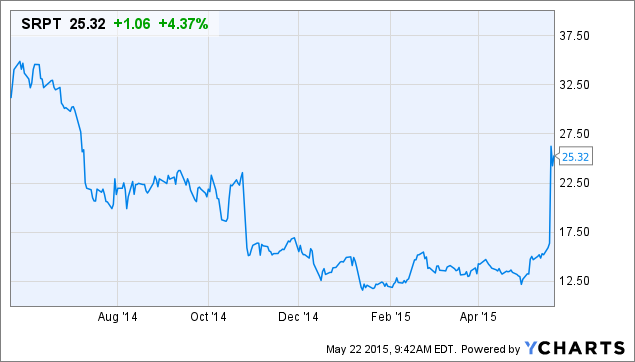