Shares of the web services giant GoDaddy Inc. (NYSE:GDDY) were on the rise this week, after the company reported solid results for its first-quarter as a public company, with total customers, gross bookings, revenue, and EBITDA coming in materially above Street expectations, while also guiding above the Street on profitability for 2015.

In response to the earnings results, analysts from Piper Jaffray and Oppenheimer shared their thoughts and expectations of the stock, in a research reports released today. GoDaddy shares are currently trading at $26.82, up $0.05 or 0.19%.

Oppenheimer analyst Jason Helfstein slightly raised the price target for GDDY to $32 (from $31), which represents a potential upside of 19% from where the stock is currently trading.

Helfstein commented: “Following better 1Q EBITDA and FY guidance, we are modestly increasing our target from $31 to $32. While 1Q EBITDA was 8%/7% above Opco/Street, FY EBITDA guidance was 3% above the Street. As a reminder, we initiated coverage on GDDY Monday, 5/11/15. We continue to believe GDDY is the category leader, and well positioned to benefit from secular tailwinds as SMBs build an online presence.”

“While our ’15E and 16E revenue estimates are unchanged, we are increasing ’15E and ’16E EBITDA by 1% and 3%, respectively, on better marketing leverage. GDDY’s sponsorship of NASCAR will end in ’15, allowing the company to reallocate marketing spend across digital channels, which should improve marketing leverage.”, the analyst added.

Piper Jaffray analyst Gene Munster also came out today with a research report on GDDY, reiterating an Overweight rating with a price target of $36, which implies an upside of 35% from current levels. The analyst views the quarter favorably as it is the first step in the GoDaddy story as a public company. The company reiterated its intent to continue international expansion and is looking to expand into Asia by the end of year, which Munster believes includes China. The company rolled out its GoDaddy Pro product last week, which the analyst expects to see become a larger theme going forward. 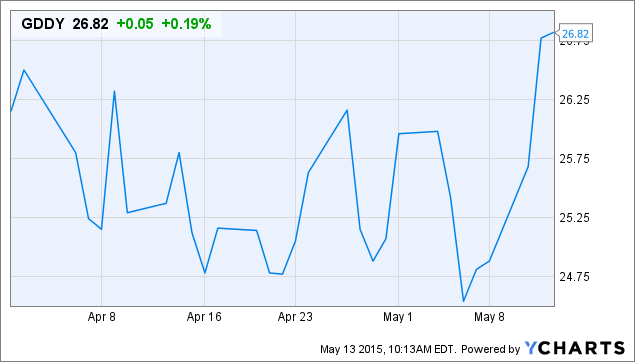 RBC Sees ‘Pockets of Opportunity’ in These 3 Internet Stocks