In a report issued today, H.C. Wainwright analyst Andrew Fein maintained a Buy rating on Insmed Incorporated (NASDAQ:INSM) and a price target of $30. The report was issued during an ongoing retrospective study evaluating the correlation of changes in microbiological scale and culture conversions.

Fein said: “In our view, the Griffith study confirms that INSM’s choice of the 7-point microbiological scale as an NTM endpoint was a correct one, prospectively. However, as a reminder, the Arikayce Phase 2 study failed its primary endpoint of change on the 7-point scale, but won on the secondary endpoint of culture conversion. At first look, this does appear at odds with the Griffith near-perfect correlation between scale and conversion. However, we note several differences between the studies: (1) TARGET was smaller , shorter and more diverse than the Griffith retrospective; (2) TARGET patients were younger, sicker, and not restricted to MAC only like in the Griffith retrospective; and (3) the conversion endpoint in TARGET was defined as “demonstrating a negative culture by day 84”, while in the Griffit

According to TipRanks.com, which measures analysts’ and bloggers’ success rate based on how their calls perform, analyst Andrew Fein has a total average return of 15.3% and a 66.7% success rate. Fein has a -6.4% average return when recommending INSM, and is ranked #492 out of 3289 analysts. 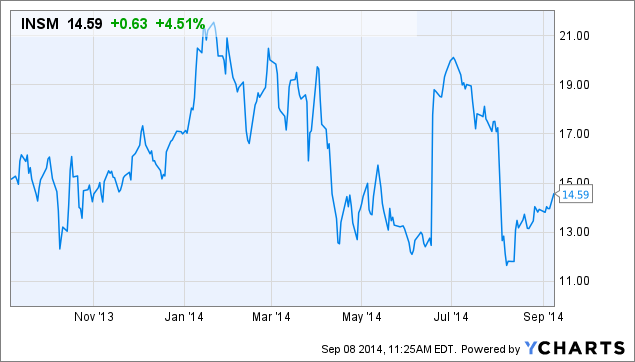